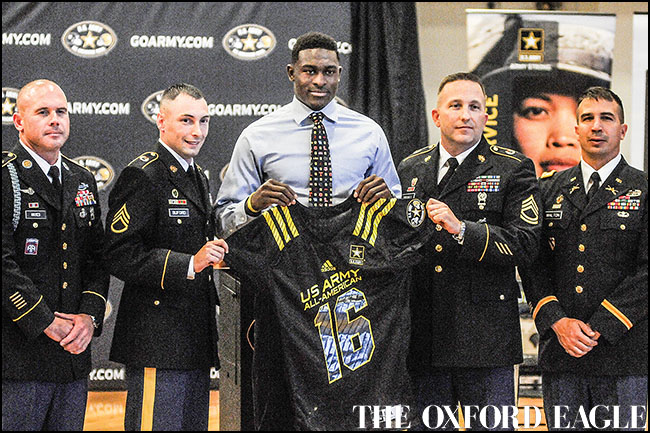 Oxford High wide receiver D.K. Metcalf is presented his jersey for the Army All-American Game during a ceremony at Oxford High in Oxford, Miss. on Tuesday, September 29, 2015.

Terrence Metcalf tried to break his seventh-grade son. He couldn’t.

It was then that D.K. Metcalf’s father knew his son had a chance to morph into what he’s become on the football field — a U.S. Army All-American.

The younger Metcalf was presented with his 2016 Army All-American Bowl jersey Tuesday during a ceremony at the Oxford High gymnasium as part of the bowl’s selection tour. Metcalf, who will be a member of the East team, will be one of 90 top prep players nationwide to participate in the annual game, which will be played Jan. 9 at noon local time at the Alamodome in San Antonio.

But the standout receiver is the first Oxford player to ever represent the school in the game.

“It feels great just to know that I was the first one,” Metcalf said. “It’s real great and just a major honor.”

The 6-foot-3, 200-pound Metcalf, an Ole Miss commit, has been starring for the varsity team since his freshman season. It was then that he found out about how big the game was and some of its past participants, which include NFL stars Adrian Peterson, Andrew Luck, Jamaal Charles and Odell Beckham Jr. Metcalf is one of two Mississippians who will play in next year’s game, joining Noxubee County defensive end Jeffery Simmons.

“In the ninth grade, I had something in my head that said you can’t stop working,” Metcalf said. “Ever since then, when I heard about the game, I’ve been trying to make it ever since.

“I just thank God. It feels great. Just to be called a U.S. Army All-American, it’s a dream come true.”

Watching Metcalf slip on the jersey for the first time was just as big a treat for his family, including Terrence, who knows a thing or two about being highly sought after in the prep ranks. Much like D.K., Terrence was one of if not the top recruit coming out of Mississippi during his senior season at Clarksdale before turning into an All-American offensive lineman at Ole Miss and a Super Bowl champion with the Chicago Bears.

“It’s just a blessing from God, man, just to see his name being called with some other elite guys in the country,” Terrence said.

It’s potential Terrence saw when he took it upon himself to put his son and some of his teammates through rigorous workouts the summer before their seventh-grade year, which first signaled the combination of mental toughness and physical ability the younger Metcalf has played with throughout his career.

“We were working out, running sprints, running the stadiums, and I couldn’t break them,” Terrence said. “Once I saw that they had the will to push past some of the things I was doing to try to make them quit, I knew those kids had an opportunity to play a lot of football beyond high school.”

“He’s one of the top receivers in the nation,” Hill said. “If there’s one better, I’d like to see him.”

Metcalf, a consensus four-star recruit who’s ranked as high as the nation’s No. 3 receiver by Rivals.com, said he’s solid with his commitment to Ole Miss and doesn’t plan on taking any other official visits despite continued interest from Cal, Alabama and Auburn. As for the game itself, Metcalf’s goal is simple.

“Going against some of the best high school players in the nation, I just want to show that I’m ready for college,” Metcalf said.