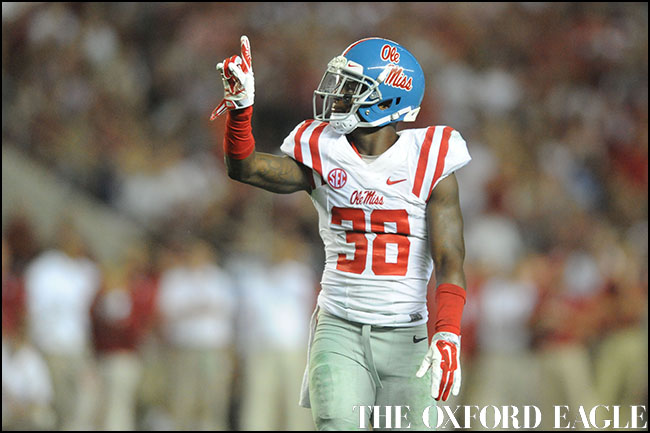 With Tony Conner out of action for at least another three weeks after surgery due to a meniscus tear in his knee, the Ole Miss defense has gotten younger in a hurry.

A.J. Moore and true freshman Zedrick Woods are manning Conner’s post in his absence. In their first game on duty against Vanderbilt, they did not have a poor performance. The duo combined for five tackles with Moore recording three solo tackles. Neither had a pass breakup or interception.

With such youth and lack of experience replacing Conner for the foreseeable future, Elston and senior Mike Hilton have been there during the game and practices and even off the field to lend an ear if Moore or any others have a question.

The feeling may be that Moore and Woods are going to be lost until they get live action at the Huskie position. With the counsel of Hilton and Elston to help guide the way, those feelings will be pushed away quickly.

“If I see them a step behind or something or their leverage is not right, I’ll step in and say, ‘Do it this way or do this that way,’” Hilton said. “It’s just really taking my leadership role.”

Lack of execution
Last Saturday was probably the poorest the offensive line has played this season, including the Alabama game.

Chad Kelly was sacked three times and constantly pressured. The line struggled — along with the rest of the offense — when it came to goal-line situations.

It was not so much what Vanderbilt did but what Ole Miss did not do in those key moments.

“The theme of (the Vanderbilt game) for me was just inconsistency,” offensive line coach Matt Luke said. “There was a lot of good things on the tape from the young guys, but there was some inconsistencies that stopped some drives. We had a couple plays on the goal line that had no chance because we missed assignments. They just had no chance from the beginning.”

Adjustments during a game to what a defense is doing are second nature for a football player. When it comes to younger players, such as freshmen Javon Patterson and Jordan Sims, who are lacking an abundance of game experience, it takes a little longer.

With the news of Justin Bell and Rod Taylor practicing this week, it is looking more and more likely the offensive front could gain some of that experience back heading into Saturday’s game at Florida.

Ball blocker
Breeland Speaks was noted as a guy who constantly swatted down balls during fall camp. Nearly 20 balls were knocked out of the sky by the redshirt freshman defensive lineman, according to players back in August.

Speaks got his first chance at blocking one in a game last week against Vanderbilt when he got his paw on a throw from quarterback Johnny McCrary.

“This past game, I got my first batted ball because I guess I finally settled down,” Speaks said. “Basically I’ve been trying to find my way in the defense and see how I can contribute.”

Along with his pass breakup, Speaks accounted for one solo tackle against the Commodores.