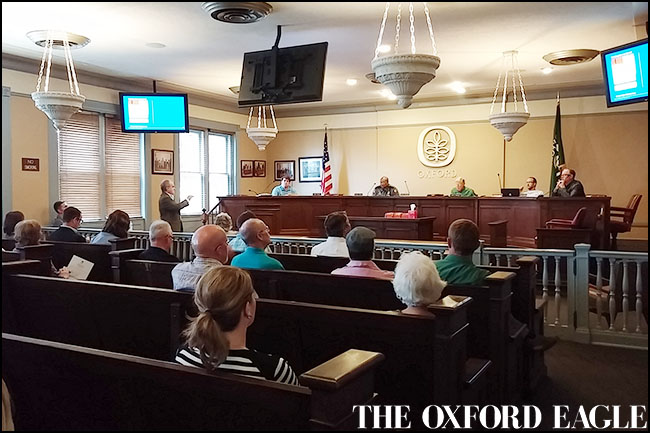 Vision 2037 was presented Tuesday throughout the day to officials, business leaders and residents who want to be involved in the city’s comprehensive plan.

Bob Barber with the Orion Planning Group, which was contracted back in the spring to complete the city’s long-range plan, presented key themes and points from the 137-page document, which is still a rough draft.

“The purpose of the draft is to be refined, it is meant to receive comment, it’s meant to test ideas, to get the concepts on the table and so forth,” he said. “We’re in a public comment and question period for clarification and to get thoughts together for the future of Oxford.”

Comment cards were distributed to solicit feedback on the plan and city planner Andrea Correll will process the input. Feedback will be taken also at City Hall for the next month. More public hearings will be scheduled for the end of October and early November before city leaders adopt an amended plan.

Barber said Vision 2037 is not a code or zoning, it is simply a plan to help rewrite codes and help the city utilize its remaining space in the best possible way.

“This sets the basis for a different kind of code, which deals more with the feel and character and quality of a place and not just fitting sort of arbitrary categories — the difference between traditional zoning and more form-based types of activities,” Barber said.

Barber said some items in the plan already have been identified as needing clarification and tweaking, including the section on annexation, on the presence of historic buildings and neighborhoods, mobility planning and more. He also said the developed land map will be adjusted and the term “urban neighborhood” will be changed to say “traditional neighborhood.”

Orion presented the various types of land and development that Oxford has and identified what could be changed in the next 20 years.

• Suburban corridor: will be slightly transformed, includes areas like West Jackson Avenue, Highway 6 West, Sisk near the Oxford Commons. Those areas will be targeted for patterned development where there is planned parking around buildings and a uniform wall along the street.

• Suburban center: will be slightly transformed, includes places like Walmart and Belk.

• Traditional neighborhood: will be maintained.

• Urban corridor: will be totally transformed, includes major streets headed out of the Square.

• Urban center: will be totally transformed, includes areas like the Mid Town shopping center, which could be targeted for new development with a mix of residential and commercial.

• Urban core: will be maintained, includes the Square.

“What’s visioned for the next 20 years is exactly what we have here today,” Lee Jones, owner of Third Coast Design in Nashville, said of the Square.

When the plan was presented to the Oxford Planning Commission Tuesday, Correll said the group will be able use the concepts to guide development in the city.

Commission member Duncan Gray asked Barber how housing for low- and moderate-income residents fit into the plan and he offered some suggestions that work in other cities, including incentivized production, a housing trust fund and a mandatory rule for developers to set aside 10 to 15 percent of units with a moderate price.

“The land costs in Oxford are too expensive for just one method. We are going to have to have a whole tool box,” Correll said.

Michael Jones, an Oxford architect, told the commission he and his clients are concerned about the plan’s recommendation for only having 12 units per acre. He said the density ratio will not allow for redevelopment of areas in town due to the immense cost of land. Developer Brad Beard echoed those concerns and said he would like more information from Orion about how other cities have created mixed-use, walkable neighborhoods with the suggested density ratio guidelines.

Mike Bridge, a resident who is a developer and taught planning at the college level, suggested to the Planning Commission that the city form a separate committee to study the plan’s findings and determine what can work successfully for Oxford.

“I like the work that is being done and I like the direction it’s going,” he said. “What I’ve heard here today is perhaps a need for almost an advisory board to assist the planning commission and mayor and board of aldermen in making some of the decisions that need to be made and some of the concerns that have been addressed here today by an architect and a developer.

“The land costs in the city of Oxford are astronomical. To accommodate some of the desires that seem to make a lot of sense in terms of housing for a moderate income and low income person are virtually impossible based not only upon land costs but the actual development cost of the land in terms of the infrastructure and then adding to that the square foot costs of the structures. Your task is one that is going to require a great deal of effort.”

Planning commission chairman John Bradley was receptive to the suggestion and said, “implementation is almost a project in itself.”