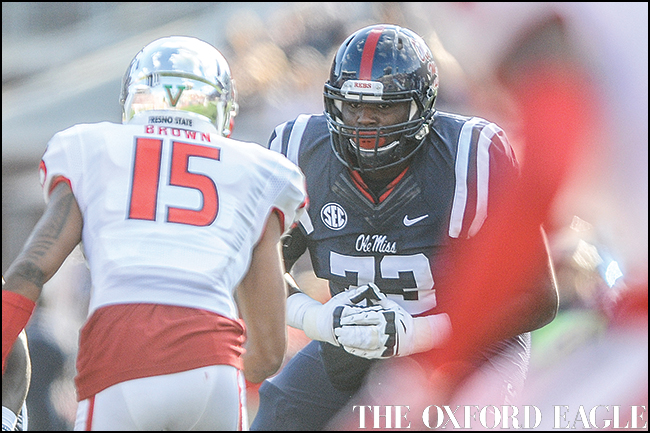 Rod Taylor is going to try to play Saturday, and his performance could determine how much more he plays this season — if at all.

Taylor has played sparingly as he works his way back from a torn labrum in his shoulder he suffered during a boxing match a couple of weeks before the season started. The injury cost the sophomore guard the opener against Tennessee-Martin. He got a series here and there against Fresno State and Alabama but was again held out against Vanderbilt last week.

Taylor has practiced this week ahead of the third-ranked Rebels’ trip to No. 25 Florida on Saturday and is “going to give it a shot for sure,” Ole Miss coach Hugh Freeze said Wednesday. But Freeze said during his weekly press conference Monday that Taylor, Ole Miss’ starting right guard when healthy, needs time to get his surgically repaired shoulder back to full strength in order to function at peak performance.

Freeze said he hoped to get “20 or so snaps if not more” out of Taylor against the Gators, but if the injury continues to hinder the 6-foot-3, 320-pounder, applying for a medical hardship waiver isn’t out of the question. To be eligible for a medical redshirt, a player can’t play in more than 30 percent of his team’s regular-season games.

“We’ve kept up with the games. If he plays this week, we would have until the New Mexico (State) game (on Oct. 10),” Freeze said. “He basically gets to play in four games, which he hasn’t done yet. If it went that route, we could do that for sure.”

Freeze said fellow guard Justin Bell hasn’t practiced this week and is doubtful to play Saturday, but Taylor’s performances during practices have at least been encouraging.

“We’ve talked about all the options, and we’ll try to do what’s best for him and the team,” Freeze said. “Right now, I don’t think we have to make a decision today. We’re just kind of progressing to see if he can get better. It’s no question he’s better this week.”

Young Gators
Ole Miss defensive coordinator Dave Wommack wants to do what just about everybody else has tried to do to Florida — rattle their youngsters on the offensive side of the ball.

The Gators are starting a redshirt freshman at quarterback in Will Grier while a pair of true freshmen, tackle Martez Ivey and guard Tyler Jordan, have gotten significant snaps in the trenches. The Rebels want to get after Grier and company, but it’s easier said than done.

Grier has proven to be mobile enough to escape pressure, posting the second-most rushing yards on the team with 114 to go with his 725 yards and six scores through the air.

“I think everybody’s tried to do that to him and put pressure on him, but he does a great job of scrambling and getting out of things,” Wommack said. “Sometimes it’s successful and sometimes not. I think he fits with the young offensive line because he can get away and scramble at times.”