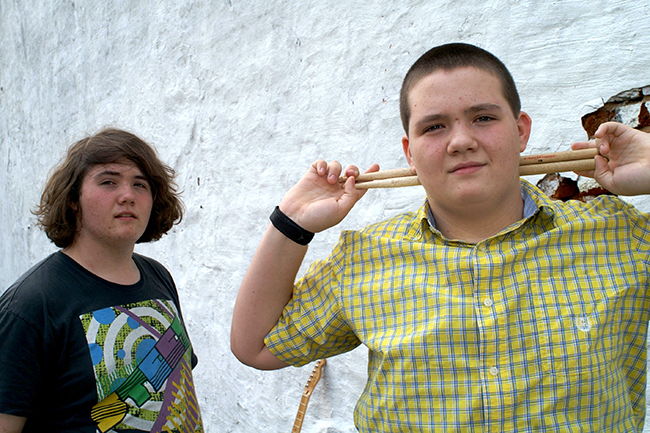 Water Valley natives Matthew Zediker (left) and Charlie Zediker are getting rave reviews with the recent release of their second album.

Matthew Zediker, 17, and Charlie Zediker, 14, a brother musician duo have stayed busy touring local venues, but they are excited about their second album’s release called “Z-II.”

Their music has previously been available on Spotify and other digital platforms, but this time the brothers have been produced through their record label with Cornelius Chapel Records.

Matthew Zediker said he is really happy with what they have produced. He said although the lyrics and topics of the single vary, the theme of the music is strong and has something for everyone.

Producer Matt Paton said, “The EP really hits on the right dynamics for the band’s sound at the moment.”

Paton added he heard Led Zeppelin, blues tunes and a liberal amount of Motörhead. He started to wonder whether or not they’d ever want to make a record.

“It just seemed like it would be a lot of fun. And, it was,” said Paton.

“When I listen back I can immediately hear tones of Black Sabbath, and Blue Cheer. “Mantra” may be the most sophisticated tune and it hints at Bowiesque theatrics and guitar chops throughout the outro.”

Their father said Paton has been a huge help in their success in the studio, and in helping them get to know other people. Andrew Yurkow was instrumental in helping along their live performance career. Other people such as Mikey Namorato and Bronson Tew, their sound engineer, have also helped advance the brothers and their careers.

Growing up, the brothers were heavily influenced by their father’s taste in music and listened to all different kinds of 60s and 70s rock. Artists such as The Rolling Stones, Cream, Led Zeppelin, Black Sabbath and Pink Floyd some staple artists they enjoyed.

“I played music for them continually when they were young,” said their father Glen Zediker. “They find their own music now, and each has a little different taste, but they are into “real” music. Not much modern stuff.”

Their father added their interest in learning to play music came from wanting to reproduce the things they heard that they liked.

Their father said he believes the experience of growing up and playing music together has helped his sons stay close to each other.

“My sons and I have always been close, we’ve shared many adventures together into many things. I think the music has shown us all that we all are a part of a whole; it takes us all, and others, to make this happen,” said Glen Zediker.

Charlie Zediker said he thinks his music is cool, but he does not know if he could still tour at 40 because it could possibly feel old for him, but he and his brother Matthew are still touring locally.

The duo performed recently in their native Water Valley during the the annual Art Crawl and have been involved in local blues music festivals as well as playing at restaurants.

All in all, both of their parents are highly supportive of their sons and the dream they share.

He added, “I’m far beyond happy for their success. I would be proud of my sons no matter what, because they have had much success in several things, including academics. But success shouldn’t be the only thing that generates pride in a parent. Pride comes from seeing how well they are regarded as people. I encourage them to follow their hearts and respect their passions into the future.”

Paton said the future is completely up them and he believes they are getting the right support at home and from the community. He added they are more than able to balance it all with their studies and responsibilities.

“I think they can go far in this industry unless they decide to become brain surgeons. These are smart, talented young men,” said Paton.

To learn more about the Zediker Brothers or to book a performance with them, contact them through their Facebook page.