Offense preps for another stiff test from Gators 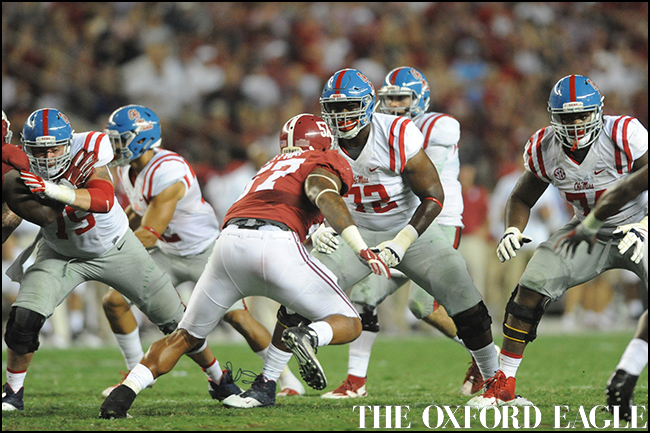 They’ll see another one Saturday.

Ole Miss’ offense has handled just about anything that’s come its way, from posting back-to-back 70-plus point games in laughers against Tennessee-Martin and Fresno State to rolling up 433 yards and 43 points at Bryant-Denny Stadium in a win over Alabama, which is allowing just 267 yards a game, second-fewest to Missouri in the SEC.

But the Rebels ran into some prolonged resistance for the first time last week as Vanderbilt, under former Stanford co-defensive coordinator Derek Mason, kept everything in front and held Ole Miss to 20 points through three and a half quarters before Jaylen Walton’ short touchdown run salted away a tighter-than-expected win. It won’t get any easier this week as the Rebels (4-0, 2-0 SEC) travel to Gainesville, Florida, to take on No. 25 Florida (4-0, 2-0) and a defense that ranks in the top 5 in the league in yards allowed, rush defense and scoring defense.

“They’re very aggressive. They like to come downhill and hit,” Ole Miss quarterback Chad Kelly said. “Their d-line is very strong. They get off the ball very well, and their linebackers do a good job flowing sideline to sideline. It’ll be a very tough task.”

The Gators are stout up front, giving up just 105 yards a game on the ground with 14 sacks, trailing only Texas A&M’s 17 for the league lead. Defensive ends Jon Bullard (4) and Alex McCalister (3) have combined for half of them, leading a line that makes a living shooting gaps and putting offenses behind the chains. Florida is averaging 8.8 tackles for loss, which is tied for 10th nationally.

“Alabama is bigger guys that will hold point. These guys are penetrators and move,” offensive line coach Matt Luke said. “They’re similar to our defense. They like to penetrate and like to create tackles for loss in the backfield. … They’re an active defense.”

Makeshift line
Ole Miss will try to slow the Gators’ line down with a patchwork group up front.

Left tackle Laremy Tunsil continues to be held out as the school works with the NCAA on an ongoing investigation into possible rules violations. Senior guard Justin Bell (leg) hasn’t practiced this week and is doubtful to play while fellow guard Rod Taylor (shoulder) will try to go, head coach Hugh Freeze said, though the sophomore’s reps will be limited if he does play.

Freshmen Javon Patterson and Jordan Sims finished last week’s game at left and right guard, respectively, and will likely get the bulk of the reps Saturday. Center Robert Conyers is still dealing with the sprained knee he suffered in the second game, though he hasn’t missed any time and “is going to gut it out,” Freeze said.

“I’m pleased with where they are,” Luke said of his freshmen linemen. “We’ve just got to keep coming.”

The pressure up front helps a back end that’s already got plenty of starpower.

Teams don’t often throw toward cornerback Vernon Hargreaves III, but the All-American still has two interceptions and will be matched up often with star wideout Laquon Treadwell. Fellow corners Brian Poole and Jalen Tabor, who’s returning from a one-game suspension this week, have combined for 10 pass breakups and a pick for the SEC’s fifth-ranked pass defense (193 yards allowed per game).

“They are definitely one of the best defenses in the country, and they are going to test us for sure,” Freeze said.