Abbeville priming for the future 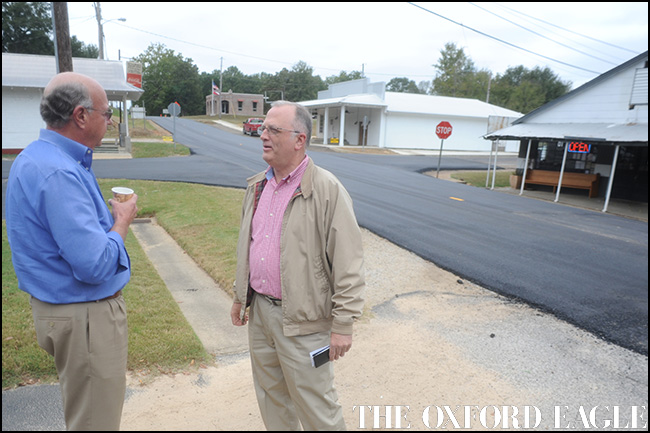 Good things are happening these days in Abbeville.

Residents of the small town eight miles north of Oxford can enjoy a good meal at Delta Steak Company, which arrived in the spring, are thrilled to take their evening walk after work on a freshly paved main drag through the town’s epicenter and are eager to see a possible lower fire rating. And, all the rage these days, they will soon have their own free little library at their just five-year-old town hall.

The town’s leaders are making a lot work with a few people and few dollars.

Mayor Scott Fricker is especially excited about the Oct. 17 Autumnfest the town is hosting that will bring people in from Lafayette County and beyond where they can see the positives in the town. Plus, they will get to enjoy a live band, dancing, face-painting, a petting zoo, crafts, food, political speakings and much more.

“We’ve been working really hard on a lot of projects, some of which we’ve completed,” including a comprehensive plan, the mayor said.

The town had been working for a couple years on a plan and finalized it this spring. Leaders are in the implementation phase, studying ways to make everything work best and are happy to have land use maps and tools at their disposal.

“We’re in the process now of trying to get together a plan that we can use to go along with the comprehensive plan,” Fricker said.

Fricker said the plan is an effort to protect the community and ensure it grows in a pleasing direction.

“It’s mom-and-pop, small, quiet community,” he said. “About 175, 180 households and about 430, about 440 population, according to the last census. We’re trying to grow slowly and trying to grow in the right way. We don’t want to be overly strict but we want to try to keep a little bit of a harness on what’s going on in the community so we can at least know what’s happening.

“We’ve talked about a lot of these things for an extended period of time and we’ve finally gotten in here some stuff accomplished that I’m proud that we’ve gotten done.”

For now, Fricker, who has been in office for two years, said they would like to use the plan to encourage businesses on the main Highway 7 strip in town and to bring residents much-needed utilities.

“We’ve got some plans, goals and hope for commercial development and hope for more businesses on the highway and plans for developments — retail stores and businesses coming in,” he said. “But we’re trying to work basic infrastructure: water and some things everyone in town should have. It just takes time when you have very little money.”

The town’s roughly $150,000 fiscal year budget was recently approved, and a large chunk of the budget is from Abbeville taking over the local water association and putting funds toward improvements.

“The town took over the water association that was here since 1963 or 1964,” Fricker said. “We’ve been running the water system and have made some improvements and changes to it. We do have a large grant that we have applied for that looks good that will extend water lines out east of here who haven’t been served and will put some fire plugs to improve fire protection and help our insurance rates.”

Another step for utilities for the town is working with the Public Service Commission and Brandon Presley’s office to try to bring in natural gas.

“We’ve also participated in the natural gas proposal that’s coming to Abbeville, which we haven’t heard anything back from the gas people yet, but we worked on that for probably three-quarters of a year to try to get natural gas up here as an alternative to propane,” Fricker said.

Working with the county

To get to Delta Steak, residents are enjoying a freshly paved road.

Lafayette County is paving the main roads through town with a state aid agency project. County Road 201, a main roadway into town off of Mississippi Highway 7, is being repaved currently. They also will repave Graham Lake Road, which heads out toward Sardis.

“We’ll be sporting some new pavement around town,” he said. “We have an inter-local agreement with the county so they do all our road work. We don’t have to deal with all that. They do us a good job and take care of our roads. We’re glad that they do.”

Abbeville also works with the county fire department for protection. It oversees firefighting in the town, with the fire house a few doors down from the town hall, as a part of the fire district that was recently approved.

Currently Abbeville has an ISO rating of 10, but hopefully not for long, Fricker said.

“It will lower our insurance rates just because there was a fire district created,” he said. “We are served by this fire house and if we get this grant and put the fire plugs through here then that will lower our rating. We’re expected to lose one point by creating the district and we hope to lose one or two by installation of fire plugs and water system improvements.”

Fricker encouraged people to come visit Abbeville, whether it is to come have a steak or enjoy the fall festival. Or, if looking for a place to retire, there are many residents who have picked Abbeville.

“I like Abbeville,” he said. “It’s a nice place to live and it has nice folks in it. It’s close enough to Oxford and other large communities and it’s small enough that it’s good and quiet and you walk around the block and everybody knows everybody. It’s just nice.

“In some cities we’re not as big as even a neighborhood. It’s just the fact everybody knows everybody and it’s just kind of laid-back and we don’t have too many rules and regulations to keep you from doing what you want that’s within reason.”