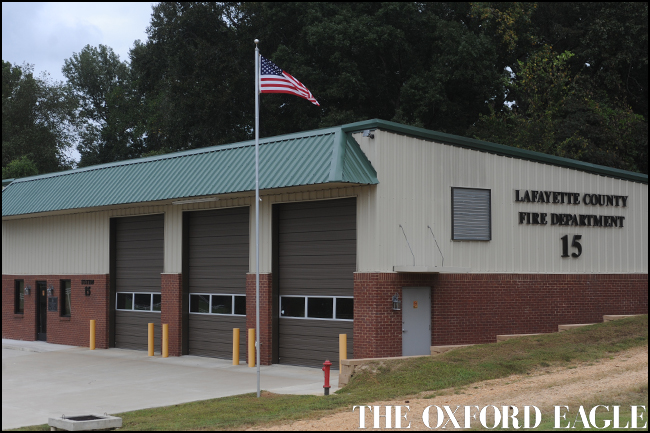 County 15 fire station is located on County Road 109 near Oxford, Miss., on Wednesday, September 30, 2015. Lafayette County plans to build a new fire station that looks like County 15. Work should begin on October 5, 2015.

Lowering insurance rates and the ability to better combat emergencies in an ever-growing population are the main reasons another fire station has become necessary in Lafayette County.

Fire Coordinator Jerry Johnson said construction on the new fire station, which will be located at 254 Highway 30 East, will finally begin on Monday with a completion date set for April 1. Construction on the $389,000 facility has been delayed for several months by bids that came in too high. The third bid from Heritage Builders in Oxford was accepted.

“We joked the other night at our general assembly meeting that we never realized this would be a three-year project,” Johnson said.

The fire station will have a kitchen, living area and showers, but also will have a safe room in case of threatening weather or a disaster.

“We’ll be able to have a room with hardened reinforced walls where we can operate radio equipment in case of a natural disaster or hunker down during inclement weather,” Johnson said.

Thinking along the lines for the future, Johnson said this will be a 30-year fire station, meaning it should last for three decades. But it will be built with future growth in mind and the possibility of one day having full-time fire personnel at the station.

“We could put bedrooms in the back overlay area for three private bedrooms,” Johnson said. “All we would need to do is put up three walls and three doors. The long-term goal would be to have some full-time personnel to supplement the staff of volunteer firefighters.”

Still looking toward the future with protecting the residents of the county in mind, Johnson added that there could be another fire station located on Highway 6 sooner rather than later.

“We have a five-mile hole in coverage in that area,” Johnson said. “Once we secure a lot, it would take place two or three years out and depends on the budget.”

The Lafayette County Fire Department will play host to the North Mississippi Fire Expo on Oct. 17. The all-day training exercise will bring an estimated 150 volunteer and full-time firefighters to Lafayette County.

“This is our third year to host it,” said Fire Coordinator Jerry Johnson. “We’ve hosted it every other year.  Approximately 30 of our staff will be in charge of the training sites.”

“Some are coming as far away as Warren County and some below I-20 have registered,” Johnson said.