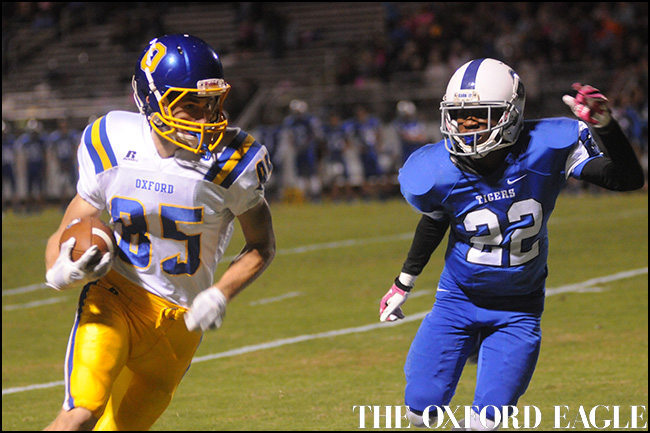 SALTILLO — Coming off a 50-28 win against West Point, Oxford coach Johnny Hill felt there was still room for improvement.

After Friday night’s performance, he gave his team passing grades in all phases of the game.

There was not any letdown from last week as it took only 10 seconds for the Chargers to grab the lead over Saltillo, and the game was essentially over from there. Oxford stayed unbeaten in Region 1-5A play with a 50-7 win over the Tigers at Saltillo High School.

“It’s always hard with high school kids after a big ball game, a lot of times they put it on coast mode,” Hill said. “We didn’t do that. We didn’t do it in practice, and I thought our coaches did a really good job of getting them ready to play and compete and get better. I thought we got better tonight.”

After a recovered onside kick to begin the game, Oxford quarterback Jack Abraham hit D.K. Metcalf on the first play of the drive for a 40-yard touchdown strike and the early 7-0 lead.

“I thought It’d be good to get the win right off the bat,” Hill said of the onside kick.

Metcalf and the Chargers’ offense was hitting on all cylinders in the first half. The Ole Miss commit’s first three touches went for scores, and Oxford (4-2, 2-0 Region 1-5A) scored on every possession in the first half besides the last when Abraham took a knee to send the game to halftime with a 33-0 lead for Oxford.

Abraham threw for five touchdowns and had only one incompletion in the first half. He finished the night 16-for-18 for 230 yards, five TDs and one interception.

With the lead and game well in hand, Hill let some other players who do not get the chance to play often get live reps and build up some experience.

It paid off as senior receiver Chris Walton and tight end Will Harvey scored touchdowns in the second half. Sophomore kicker Gray Jenkins also connected on a 28-yard field goal attempt late in the fourth quarter.

The Chargers’ defense was stingy, forcing Saltillo to punt on four of its five first-half possessions. The fifth drive ended with a missed 42-yard field goal attempt. Receiver Sirmarcus Evans scored on a 2-yard run to put the Tigers (0-7, 0-2) on the board for the first time in the fourth quarter.

“I was real proud of our defense,” Hill said. “We just wanted to jump on (Saltillo) early and often, and I thought we did. They tried to run on us and couldn’t get the corner, then they tried (up the middle) and we really wouldn’t let them in there. I thought really the only way they hurt us was throwing the ball.”

Bianco out
It was revealed last week that sophomore running back Drew Bianco’s football career was over due to a shoulder injury that involved nerve damage. Bianco was injured during the first half of the West Point game where he received the latest in a string of stinger-related injuries.

“I went to a neurosurgeon in Memphis, and he said every time I’m getting hit, I’m pinching this nerve in my neck that goes down to my shoulder and that’s why I keep getting these stingers,” Bianco said. “He said if I keep going that eventually the stingers will have permanent damage on my nerve.”

Bianco suffered stingers in the Starkville, Madison Central, Lafayette and West Point games. He is also the second baseman on the Oxford baseball team but is cleared to continue playing in the spring. He can no longer play contact sports of any kind.

Running backs Hiram Wadlington and Joseph Washington will be called upon to fill Bianco’s role the remainder of the season. Wadlington switched from jersey No. 1 to No. 8, Bianco’s number, against Saltillo and will wear it the rest of the year in honor of his teammate.