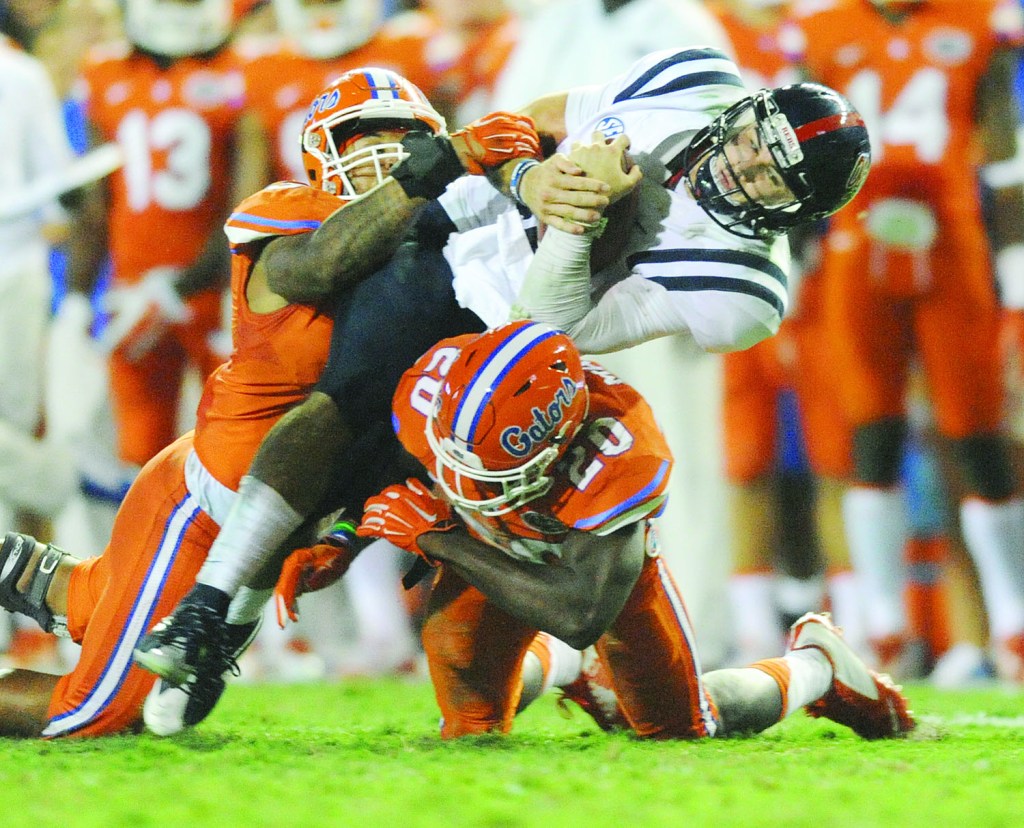 GAINESVILLE, Fla. — Ole Miss didn’t have an answer for Will Grier.

The Rebels didn’t have much of a solution for anything Florida did Saturday night.

Grier, the Gators’ redshirt freshman quarterback, torched Ole Miss’ secondary, Florida suffocated the Southeastern Conference’s top scoring offense, and No. 3 Ole Miss fell hard from the ranks of the unbeaten with a 38-10 loss to the 25th-ranked Gators in front of 90,585 at Ben Hill Griffin Stadium.

Ole Miss (4-1, 2-1 Southeastern Conference) allowed just 19 points a game through the first third of the season, but Florida (5-0, 3-0) had that many midway through the second quarter. Grier started his onslaught with a 36-yard touchdown pass on Florida’s second series and continued to pepper the Rebels, finishing 24 of 29 for 271 yards with four touchdowns.

In just his fourth career start, Grier hit on 17 of his first 20 attempts and threw for 244 of those yards and all four scores before the first half was over, becoming the first Gator signal caller in a decade to have that many scoring tosses in a half.

Ole Miss never came close to keeping up. The Gators limited a Rebel offense averaging more than 543 yards a game to a season-low 328 yards and constantly harassed quarterback Chad Kelly and his offensive line, tallying four sacks and racking up 11 tackles for loss. Kelly finished 26 of 40 for 259 yards and was the Rebels’ leading rusher with 40 yards on a night when Ole Miss averaged just 2.1 yards on 33 carries.

Ole Miss didn’t get on the board until Gary Wunderlich connected on a 22-yard field goal with 5:25 remaining in the third quarter. Kelly’s lone touchdown pass went for 7 yards to Markell Pack with 4:04 left in the game, and Jordan Cronkrite capped Florida’s second-highest scoring output of the season with a 1-yard touchdown run late.

But Florida grabbed control much earlier with a little help from the Rebels.

Three plays after Grier’s first scoring toss to Demarcus Robinson less than six minutes in, running back Jaylen Walton fumbled to set the Gators up at the Rebels’ 24-yard line. Grier found Jake McGee all alone in the back of the end zone for a 2-yard score five plays later to make it 13-0 midway through the first quarter.

An errant snap lost 19 yards on Ole Miss’ next series, effectively ending the possession. The Rebels didn’t convert a third down until the second quarter and finished 1 of 6 in the first half, needing at least 11 yards on four of those to convert.

Even the Rebels’ most consistent drive of the half — a nine-play, 80-yard march to Florida’s 12 — came up empty when Wunderlich had his first clean missed field goal of the season. Grier capped two lengthy scoring drives, including a 91-yard bleeder just before the half, with touchdown passes to put Florida up 25-0, matching the four scoring passes Chris Leak had in the first half against Kentucky on Sept. 24, 2005.

GETTING CLOSER: ‘Dores sweep Trojans, move in on region…