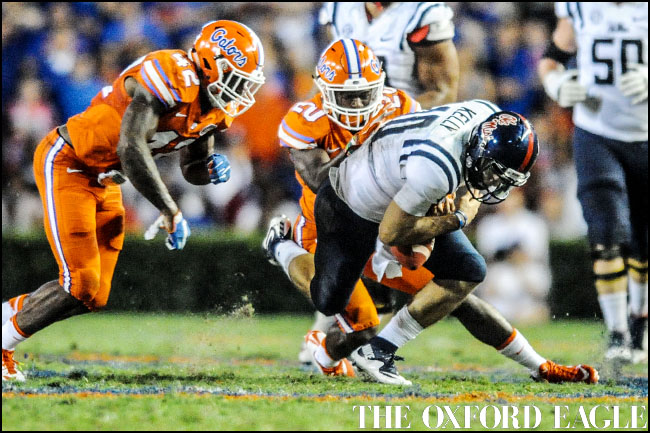 Ole Miss’ emphatic fall from the ranks of the unbeaten has the Rebels looking for answers at every turn.

That’s what happens when the offense puts up season lows in points and yards and the defense makes a freshman quarterback look like a fifth-year senior, which is what played out Saturday in Ole Miss’ 38-10 loss to Florida — the Rebels’ fourth-worst setback in Freeze’s tenure.

A week after a sluggish victory over Vanderbilt, the dam broke for Ole Miss (4-1, 2-1 Southeastern Conference) against the Gators, who continued to expose some of the Rebels’ growing flaws. Will Grier completed all but five of his 29 pass attempts in his fourth career start and had all four of his touchdown passes in the first half, peppering the Rebels’ Tony Conner-less defense with underneath throws much like the Commodores did to keep drives alive.

The Gators went 8-for-16 on third down. Only Auburn and Arkansas were worse in the SEC than Ole Miss at getting off the field on third down entering Saturday’s game, and each of the Rebels’ first three league opponents have converted at least 45 percent of the time.

“We broke down in some coverages on third down, just things that we continue to do that we’ve got to coach better,” Freeze said. “We’ve got to get better.”

Florida never let Kelly and the rest of Ole Miss’ offense get going. Either by way of four sacks of Kelly or what seemed like a brick wall that constantly stopped running plays at or behind the line of scrimmage, the Rebels needed at least 10 yards on half of their 14 third downs to convert and made it just five times all night.

The constant retreating highlighted a woeful night for the Rebels’ patchwork offensive line. Florida blew up many plays before they started with 11 tackles for loss, and Ole Miss mustered just 69 rushing yards on 33 carries to lower its average against its first three SEC foes to a miniscule 2.9 yards per attempt.

Ole Miss’ most successful drive came on the opening possession of the second half, but even that eventually went backward. The Rebels, who had just one touchdown to show for three red-zone trips, had first-and-goal at the 1-yard line but lost 4 yards on three consecutive runs and settled for a field goal.

“When you’re in the red zone, you have to score,” Kelly said. “Otherwise good teams will beat you if you settle for three let alone don’t get any points.”

Redshirt freshmen Sean Rawlings and true freshman Javon Patterson each made their fifth straight start up front while sophomore Rod Taylor was well enough to log most of the snaps opposite Patterson at guard with senior Justin Bell sidelined with a bad ankle, but the entire unit was overwhelmed by the Gators. Freeze said he isn’t about to blame the inept play on youth.

“You know what? Everybody’s got some young kids, everybody’s got injuries, and nobody really wants to hear that,” Freeze said. “We’ve got to get the ones we have prepared to play and play better.”

It all leaves plenty for Ole Miss to work on over the next five days before New Mexico State (0-4) comes to town.

“We’ve just got to prepare for next week and get ready for the next game,” safety Mike Hilton said