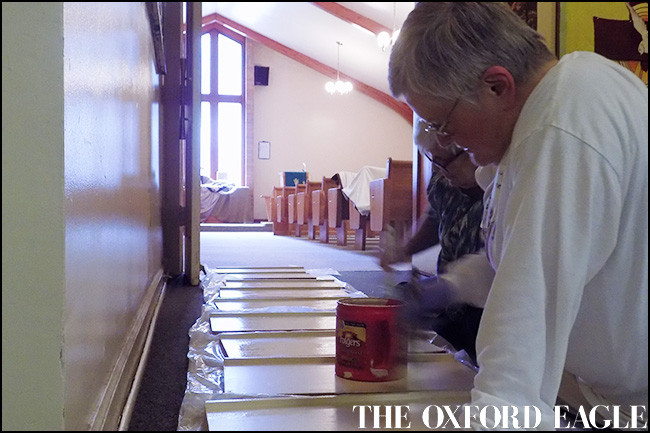 Members of Oxford-University United Methodist Church traveled to Indianola for a mission trip to help a church this weekend.

The mission team of 65 people arrived in Indianola on Saturday morning and began working. The crew did everything from paint, landscape and build a ramp for disabled members and repair the parsonage.

“Words truly cannot begin to express the excitement and gratitude of OUUMC reaching out to RUMC,” said the Rev. Paulette Buford of RUMC.

In addition to performing maintenance and repairs, OUUMC also held a food and coat drive for Raspberry congregation members.

Buford, 45, said a member of OUUMC who worked in Indianola contacted her and asked about the mission team coming to the Delta and if Rasberry would like to be part of that mission.

There were a few phone calls and a planning committee and the trip to help Rasberry was planned.

Buford said she has learned not to second-guess the reasons why some things are given, but to accept the graciousness with which it was given.

“The crew of people present at the church on Saturday were reaching out to a smaller church in a smaller community with a purpose. I do not think OU was here because they felt Raspberry was a church in dire straits but as one church closing the gap in miles through the art of giving,” she said.

Buford had never been to the Delta until she was appointed to Rasberry UMC. When she first started preaching at Rasberry, she did not know what to expect of the congregation. Only one female pastor served the church in 1982 and she was white, and Buford is the church’s first black female pastor. However, she said she is blessed to be there.

“I am so amazed and grateful at the love of Christ Rasberry showed upon me. When we allow the Holy Spirit to move freely among us, there is nothing that God cannot do,” she said. “Hearts can be mended, minds can be changed, souls can be saved when God is in the midst and not on the sideline.”

Shelby Knighten, 21, of Gautier, helped with Rasberry’s renovation as a painter.

“I noted the Delta Mission Trip as a ministry option. I spent some time praying about the different avenues of service, and I felt led by the Holy Spirit to participate in the mission trip, honoring the membership commitment made by OU members towards gifts and service for the body of Christ,” he said.

Knighten said after an intense week of college, he found “rest” through the missionary service.

“Seeing an army of OU and Burns members working as a single cohesive unit through which God’s grace can flow and work exemplifies the Christian message of the church as active entity,” Knighten said.

Buford said the most important aspect of having the Oxford group come was the fellowship and togetherness.

“I would like to express my deepest gratitude to everyone who help make this mission possible and everyone that participated. Because of your act of kindness, lives will never be the same and hearts have been lifted knowing that there is no limit to what God can do,” Buford said.