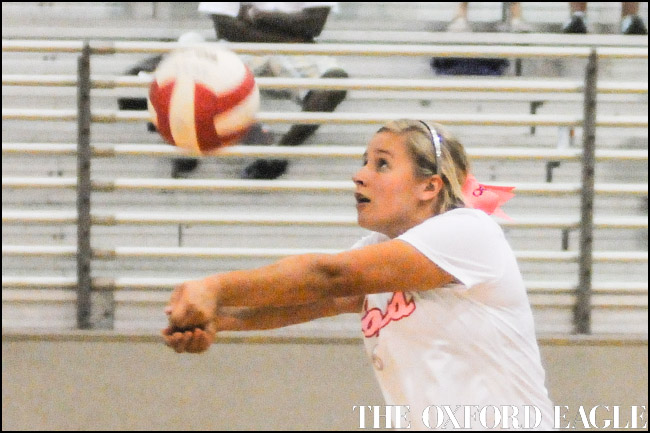 Lafayette High vs. Amory in volleyball action in Oxford, Miss. on Monday, October 5, 2015.

Lafayette claimed the region title Monday night. Judging by the way the team celebrated afterward, you would not have known it.

That is just how Commodore coach Clint Jordan likes it.

“I’m very business-like in the way I do things,” Jordan said. “They really do take on my personality. We understand that yeah, it’s a big win, but there is something bigger ahead. Now we’ve got to prepare for playoffs. … We’re in it, and they know what’s in front of us.”

The opening set was not much of a challenge for Lafayette (20-14, 7-1 4-4A/5A) as the Commodores used their serve to their advantage, keeping Amory off balance on the returns and scoring easy points. The Panthers served only four times in the opening set.

It was a little closer between the teams in the second frame with Amory staying within reach of Lafayette, trailing only 10-6 midway through the set. The Commodores were able to pull ahead late and take a 2-0 lead heading into the third set.

“Second set, I think we were trying to do a little too much with our serve and got away from what we do,” Jordan said. “What we do is we serve gaps. We serve between people, and we were serving the ball directly at (Amory) and on top of that we hit a few in the net. I think our serving got a little too relaxed. … You can’t expect the same results, not in volleyball. The ball is round and people’s arms are round, so when it hits it, it could go anywhere.”

With the match seemingly in hand, Jordan took the opportunity to rest some of his starters, including seniors Kylie Glass and Emily Robinson. With girls in that normally do not see much action, Lafayette continued to dominate on the floor, keeping Amory at bay to clinch the match and the title.

“Those other girls have worked hard, and they’ve earned the right to play,” Jordan said. “A lof of our starters played a lot of minutes (last weekend), and we want to make sure we are as fresh as we can be.”

Looking ahead
With the region title and No. 1 seed in the playoffs secured, Jordan will turn his team’s focus toward the rest of the week where it will see playoff-caliber teams. The Commodores host Corinth tonight and crosstown rival Oxford Thursday night.

The Commodores and the Chargers had an unscheduled meeting on Saturday in the Volley for the Cure tournament that both schools hosted. Oxford, which claimed its region title a couple weeks back, got the better of Lafayette in that meeting, but Jordan has an idea of what to expect in the final match of the regular-season trilogy between the teams.

“There’s no secrets, we’re crosstown rivals,” Jordan said of Oxford, “We know what they do well, and they know what we do well. The biggest thing is it will always be a fight and it will always be ‘til the end. I’ve been coaching two years here and we’ve played them four times. All four times, each set has come down to the final three or four points.”

With the No. 1 seed, Lafayette is guaranteed to host an opening-round match in the MHSAA playoffs beginning Oct. 20.