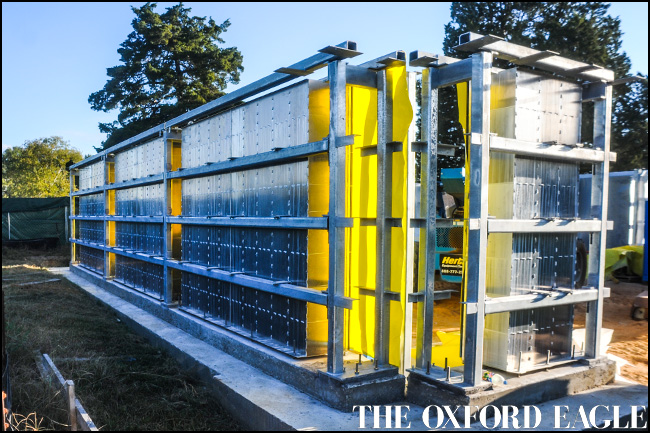 A columbarium is currently under construction at the Oxford cemetery, in Oxford, Miss. on Wednesday, October 7, 2015.

Columbarium niches in the city-owned cemetery will soon be up for sale as the Oxford Board of Aldermen consider amending the cemetery ordinance.

On Tuesday, the aldermen heard the first reading of the ordinance amendment that would include the niches recently built by the city to create more space in the cemetery and allow for more sales, which generates funding for maintenance of the Oxford Memorial Cemetery.

Construction began on the columbarium earlier this year. There are close to 800, 12-inch by 12-inch by 18-inch niches that could fit six smaller urns; however, in the ordinance presented Tuesday, each niche would be limited to two urns.

Aldermen Jay Hughes disagreed with limiting the number of urns.

“I say if they own it, let them put however many they want in there,” Hughes said.

City Attorney Pope Mallette said an argument to control the number of remains in one niche is avoiding confusion.

“If you have six, eight or 10 stuffed into one niche, you have the city trying to keep up with who has access to them,” Mallette said.

Urns are treated under state law the same as a body buried in a graveyard and they require a court order to be removed.

Public Works Director Bart Robinson said the prices have not been set on the niches. After visiting a Memphis funeral home, he said average rates range from $1,500 to $3,200.

“Niches on the very top … and the very bottom (of the columbarium) are cheaper, while the ones at eye level are more expensive,” he told the aldermen. “We’ll come back before you once we have the prices set.”

Once a niche is purchased, future transfers of ownership will be allowed but not by the city of Oxford. If an owner sells their niche, it would solely be up to an attorney to transfer the property and the new owner is responsible for purchasing a new marker plate.

In the ordinance read Tuesday, funeral homes would be required to contact the city to set up a burial time with a minimum of 36 hours notice for any funeral. If a service is set up before or after normal working hours, an additional $700 would be charged.

Several aldermen took issue with that inclusion as well, saying while the city should have its cost covered for employees to be at the service, $700 was too high. Aldermen Janice Antonow also said some families might want an immediate cremation and be put into the niche sooner than 36 hours.

“I agree we need to cover our cost but it sounds like $700 is too high,” said Alderman Robyn Tannehill.

Mayor Pat Patterson suggested Robinson work with Environmental Services Superintendent Amberlynn Liles on some of the aspects of the ordinance including the weekend charge and number of remains allowed in one niche before the second reading and public hearing at the aldermen’s Oct. 20 meeting at 5 p.m. at City Hall.

Medical complex to be built next to new hospital