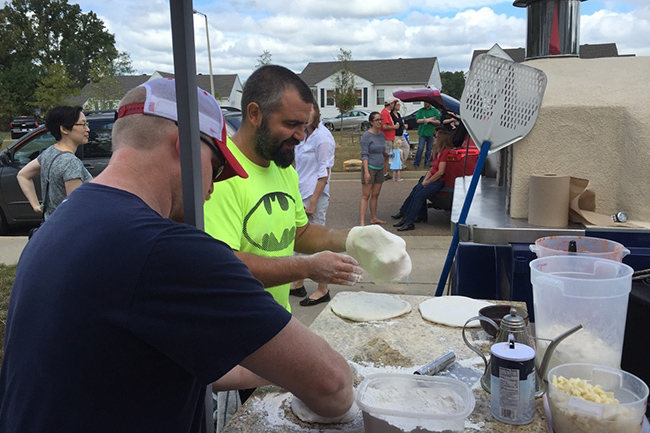 Blake Adams Marco D’Emidio prepares a pizza on a wood-fire oven at his son’s first birthday party held at their house in north Oxford on Sept. 26.

Marco D’Emidio is a native son of Italy, a dad, a geologist and a chef.

He and his wife Stacey live with their 1-year-old son Nico in a home in north Oxford where they have a garden that grows everything from tomatoes to lemons.

D’Emidio grew up in Abruzzo, a region of Italy that lies east of Rome on the shores of the Adriatic Sea.

His family owned a small farm where they had a variety of vegetation and a few animals for things like eggs and dairy. The next-door neighbor raised livestock so nearly everything his family needed to live off of was close at hand.

“My interest in cooking has always been there,” D’Emidio said Tuesday while waiting on his pot of penne pasta to boil. “I grew up on the farm with my family and my grandparents ran the community farmers market. You could consider my grandmother to be one of the masters. My grandfather could barely boil water but he was a beekeeper and was very good at it.”

It was during this time that D’Emidio learned about food sustainability and what it takes to cook everything from scratch.

Family vacations took him to islands in the Gulf of Naples where he learned about the food culture of south Italy and how to make the perfect pizza.

He began to take cooking more seriously while attending college in Rome where he studied geology and coached children’s soccer.

He also had a friend in the city whose uncle owned a local restaurant and he began working there as a cook, experimenting with new flavors and ingredients like he had learned to do in his childhood.

Upon graduating, he stayed in Rome for a few years and used his degree to helplocal developers better understand the Roman landscape and geological situation. That’s when he got a call from a friend about a university job in America.

“A friend from college who was at Ole Miss called me and said they needed help with a project the university was working on,” D’Emidio said, helping baby Nico readjust his high chair. “So I said ‘sure.’ I left everything I knew and came to Oxford. That was in 2010.”

Marco had originally planned to stay for about a year but six months into the job, he realized he loved it. The university liked him too. As did Ole Miss alum Stacey Sanford. So he stayed and the pair started a family.

Currently, Marco is working with some friends on opening a new pizza restaurant by the name of Saint Leo. For over a year, he entertained the idea of running food truck in Oxford where he would serve artisan pizzas but was unfamiliar of the more bureaucratic side of what it takes to own a small business.

So D’Emidio joined forces with like-minded friends and the group is now working to open a restaurant in a permanent location in town.

“I know cooking and I know pizza,” D’Emidio said, adding homemade mozzarella to his pasta dish. “I’m much more a scientist than a businessman. Luckily, I met the right people and we have a good thing going.”

The restaurant is presently in search of a venue and in the meantime is doing what are called “pop-ups” where it will be at a certain place in town for one night serving food. The next pop-up will be at the Ole Miss Motel on University Avenue next week in conjunction with an art auction as a part of the One Night Stand Motel Art Show.

Tickets are $20 at the door and include food, drinks and first dibs on artwork. The pop-up after that will be held on Nov. 20 at the Powerhouse.