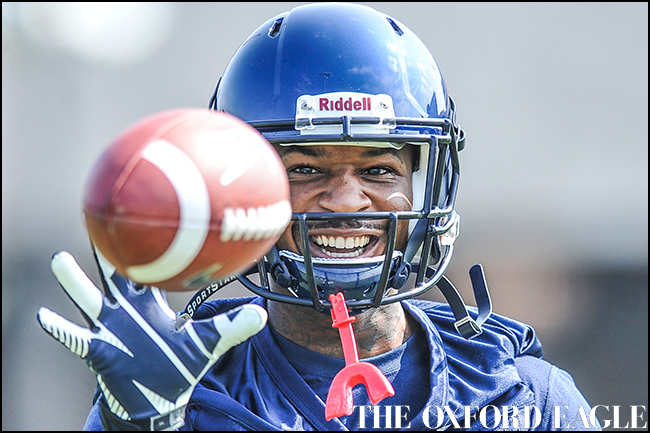 Mississippi's Tee Shepard (2) at football practice in Oxford, Miss. on Saturday, August 2, 2014. Mississippi opens the season against Boise State in Atlanta on August 28, 2014.

Citing injuries and complications from a lifelong hearing impairment, Shepard said in a statement released Wednesday that he’s done playing football. The former junior college All-American said he will stay in school to finish his degree.

“The injuries and challenges I have overcome the last few years have taken away my love for playing the game of football,” Shepard said in the statement. “I want to thank Rebel Nation for the support they have shown me in my time here. I want to especially thank (head) coach (Hugh) Freeze for showing me what unconditional love is like. I will always love this team and cheer them on as they compete for a championship.”

Shepard spent the Rebels’ first five games as the third cornerback behind Tony Bridges and Kendarius Webster, finishing with just two tackles and a pass breakup. Kailo Moore is now the top reserve at the position while true freshman Cam Ordway has been running with the second team in practice this week, Freeze said after Wednesday’s practice. Wide receiver Derrick Jones, who spent time at corner as a freshman, could also move over and get some reps.

“While we had hoped Tee would continue playing, he has chosen to conclude his career and focus on finishing his degree here at Ole Miss,” Freeze said in a statement. “We respect his decision and wish him the very best. He will always be a part of our family, and we hope he continues to use his platform to impact others.”

Shepard, a California native who signed with Notre Dame out of high school, signed with Ole Miss out of Holmes Community College last February, but he tore a toe tendon during fall camp that required season-ending surgery. Shepard has also been dealing with a knee injury this season, Freeze said during his weekly press conference Monday.

He was healthy entering the season, but his hearing impairment, which Shepard described in the spring as low-sound frequency, was a hindrance despite how much he and coaches spoke about modern advances.

Shepard was fitted with small, new-age hearing aids when he arrived on campus that could be worn during practices and games, and he heard a whistle on the field for the first time ever last fall.

But Shepard’s reps decreased with each game this season as he struggled to keep up with offenses before the snap, a problem that was magnified in games at Alabama and Florida.

“In that kind of environment, they used a lot of shifts and a lot of motion. A lot of teams have been doing that to us,” Freeze said Monday. “It has nothing to do with his physical skills. When they do that, we have to make a check, and that is very difficult for him.”

Moore is injured and “probably out” for Saturday’s game against New Mexico State, Freeze said, meaning the Rebels are closer to getting Ordway on the field for the first time than not, though Freeze said a final decision on that would likely come Friday.

Mounting injuries
Moore is just the latest injury added to a list that’s gotten lengthy through the first half of the season.

In addition to Tony Conner and C.J. Johnson, who are out for at least the next few weeks after meniscus surgeries, offensive linemen Justin Bell (ankle), Javon Patterson (ankle) and Robert Conyers (knee) will all sit Saturday as will running back Jaylen Walton (unspecified) and wideout Damore’ea Stringfellow (unspecified).

Guard Rod Taylor “was the best (lineman) we had out there” against Florida and is making weekly progress in the recovery from his torn labrum, Freeze said. The coach hinted last week that a medical redshirt could be in play for Taylor if he didn’t show improvement, but that’s no longer the case.