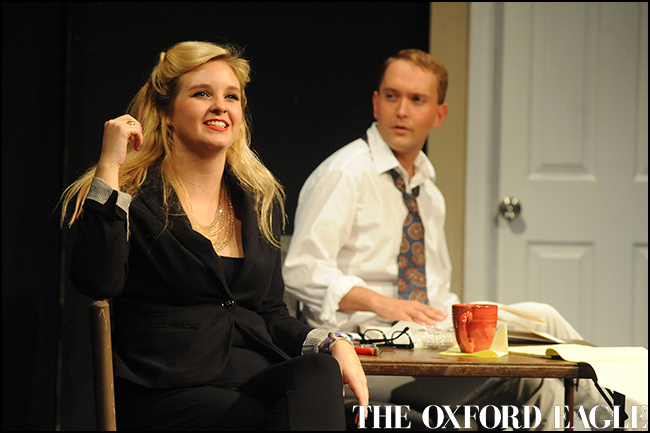 Theatre Oxford will present the 16th anniversary of its Ten Minute Play Festival starting at 7 this evening at the Powerhouse Community Arts Center.

Additional performances are scheduled for 7 p.m. Friday and 2 p.m. Sunday at the Powerhouse.

Two locally written plays will also be featured: “Buck Meets the Devil,” by David Bell and “Soccer Lessons,” by Daniel Mattern, who is also directing the play.

Every year, Theatre Oxford holds the national 10 Minute Play Contest, receiving submissions from playwrights from all over the world. The top five finalists from the contest are presented at the staged readings in May, where the grand-prize winner is determined.

The winning play is then fully produced along with four other plays, featuring several written by local playwrights, at the annual Ten Minute Play Festival in the fall. The festival involves lots of talented local actors and directors and celebrates the playwright and the genre of the 10-minute plays.

Theatre Oxford is now celebrating 16 years of 10-minute plays. Local playwrights Neil White and L.W. Thomas founded the national 10 Minute Play Contest in 1998. The first grand-prize winner was produced in 1999 prior to the production of White’s play “Paper.” The annual Ten Minute Play Festival started in 2000 and featured the grand-prize winner from the national contest and locally written plays.

“The Festival has evolved into a wonderful balance of plays by national and local playwrights, all brought to life by dedicated directors and performers,” said producer Meaghin Burke. “ This year’s plays run the gamut from heartfelt drama to screwball comedy. There’s something for everyone.”

Dan Mattern is a professor of Chemistry at Ole Miss. He has felt the allure of theater since junior high school, when he wrote and acted in a short play about a Thanksgiving Day rocket ship trip to the moon. For Theatre Oxford, he has written “Hellspace,” “Taking Off,” “The Unabridged Minutes of the Theatre Yucca Basin Theater International Ten-Minute Play Competition Selection Committee,” played cello for “The Reckoning, “ acted in “Christmas Presence” and directed “Two Dead People Talking.”

Alyssa Schnugg has been in various shows over the years in Florida where she lived before coming to Oxford in 2007. She was in Theatre Oxford’s summer production of “Harvey” in 2014. This is her first time directing. She works at the Oxford Eagle as a writer and city editor.

Melanie Addington is a former Theatre Oxford Board member and current big fan. Her day job is executive director for the Oxford Film Festival. She also directs, writes, and produces films and serves on the Mississippi Film and Video Alliance as President. She co-founded OxFilm, the Yoknapatawpha Arts Council’s program to lend equipment to Oxford filmmakers.

Mary Stanton Knight has been involved in the arts since she could talk her parents said. She has been an actor in numerous plays including “It’s A Wonderful Life,” “Kiss Me Kate,” and “The Importance of Being Earnest,” and was the assistant director for OTP’s production of “A Tuna Christmas.” This is the second year Mary has directed for the Ten Minute Plays Festival.

Kat Dunn Watson graduated from Clemson University in 2014 with a Bachelors of Arts in production studies of performing arts with a concentration in theater and emphases in acting and directing. She has been acting for 18 years and has worked as an actor, director, stage Manager and master electrician on multiple productions such as “Jesus Christ Superstar,” “Rent,” “The Bald Soprano,” “The Children’s Hour,” “Ensemble” and “Antigone.”

Tickets are $10 for Theatre Oxford members, seniors and students, and $15 for non-members, and are available online at http://www.brownpapertickets.com/event/2188644 or at the door before each performance.