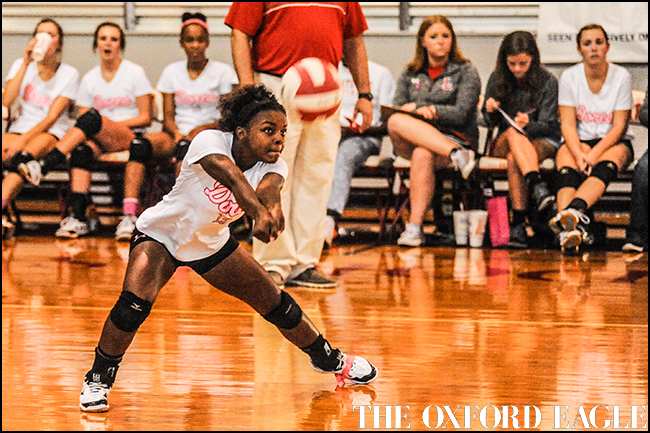 Oxford High vs. Lafayette High in volleyball action at LHS, in Oxford, Miss. on Thursday, October 8, 2015.

What started off as another dominant performance by Lafayette turned into a grind-it-out, four-set victory over crosstown foe Oxford.

“I think we needed this,” Oxford coach Tara Ross said. “We haven’t had to fight in a really long time. I hate the outcome was what it was, but we needed this and to see what we were and what we’re made out of. We came close, but we focused too late.”

It had the feel of a postseason environment, and Lafayette fed off the home crowd, starting fast and taking the fight to Oxford.

The Chargers (26-8) were not ready for the shots Lafayette was giving them. The smallest margin the Chargers trailed the first two sets was 5-4 in the opening frame and the largest was 13 points at the end of the second.

The teams had an unscheduled meeting last Saturday during the Volley for the Cure tournament the schools hosted with Oxford sweeping the Commodores, 2-0.

“I honestly think that we sometimes think the other team is just going to roll over and play dead for us,” Ross said. “We just don’t get focused. Because we beat (Lafayette) on Saturday and they are just going to think, ‘Oh, Oxford is just better and they’re just going to win.’ … It’s majorly disappointing.”

When it looked as if Lafayette was going to cruise to a 3-0 sweep, the Chargers started to get their offense back in rhythm toward the end of the second set, stringing points together.

That momentum carried over into the third frame where Oxford pulled ahead 10-8 and held off the Commodores in a highly contested set to avoid the sweep and make it a 2-1 match.

“Oxford, you’re not going to wear them out,” Lafayette coach Clint Jordan said. “It’s just good volleyball. They had the momentum and at one time, it was tied at 23. I can’t ask for more than that. (Oxford) came out on a good end of a few swings. I felt like they won that game, it wasn’t something we did to lose it.”

The fourth set was played about how everyone in the gym expected the entire match to go — a close back-and-forth affair.

Oxford and Lafayette traded points throughout the frame, tying it at multiple points including, 20-20 and 25-25. Lafayette did just enough at the end to capture the final two points to claim the set and the match.

Jordan improved to 1-4 against Oxford in his first two years at the helm at Lafayette.

“It just feels good to come out on the winning end of this,” Jordan said. “Oxford’s had our number since I’ve been here. They’re an excellent team, and they played that way. I just felt like we raised our defensive level tonight. If we can maintain that, we can really make some noise in the playoffs.”

OUT IN THE MIDDLE: Defense takes another blow with…