Caldwell ‘comfortable’ taking over in middle 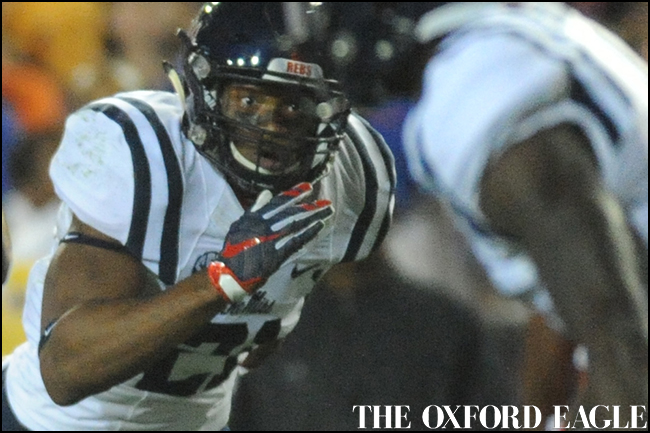 Four days ago, Terry Caldwell was a reserve who had a particular skill set to help Ole Miss and its depth at linebacker.

Now the Rebels need everything he’s got.

Caldwell will get the first crack at replacing middle linebacker C.J. Johnson, who is out for at least the next month after having surgery earlier this week to repair his meniscus. Johnson hinted at his injury on social media Tuesday before the school confirmed the procedure later in the day.

That left seniors Christian Russell and Temario Strong as well as Caldwell as the candidates in the middle, but it will be Caldwell — for now at least — who gets the nod when the Rebels take on New Mexico State on Saturday at Vaught-Hemingway Stadium (11 a.m., SEC Network).

“Terry’s going to get the starting job this Saturday, and we’ll see how he does,” Ole Miss coach Hugh Freeze said.

Caldwell was a surprisingly fast riser up the depth chart if only because he started his time with the Rebels as a Stinger, or outside, linebacker in the spring after signing with Ole Miss as one of the nation’s top tacklers in the junior college ranks last season at Northwest Mississippi CC.

Caldwell has played in every game this season, forcing a fumble and recording eight tackles, and doesn’t feel as green as he once did at a relatively new position.

Different speed
Not having to worry about relaying the play call from the sideline and getting the defensive front lined up properly before the snap — Wommack said he’s left that to Denzel Nkemdiche and DeMarquis Gates on the outside nearly all season to “take it off the guy that has the least experience” — Caldwell is free to roam the field using a combination of speed and athleticism that helped him rack up 122 tackles a season ago at NWCC, fourth-most nationally.

Said Freeze, “On early downs when they throw, he is more athletic and covers probably a little bit better than C.J.”

The Rebels have already been using Caldwell on obvious passing downs, and they could use more of that swiftness to help a defense that’s allowing 216 passing yards a game and opponents to convert 40 percent of the time on third down.

“A lot of linebackers nowadays are evolving into the more speed linebackers instead of just like the big, Ray Lewis Miami linebackers,” Caldwell said. “I feel like my speed and across the field sideline to sideline is going to play a big role in the game Saturday.”