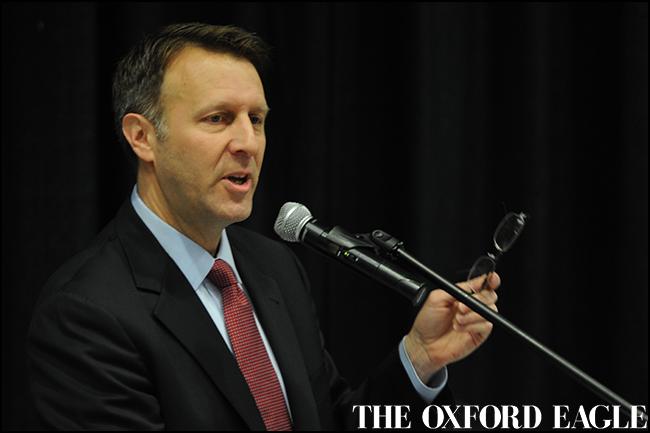 Bruce Newman State Senator Gray Tollison (R-Oxford) says he is in opposition of a plan to dissolve the Mississippi Arts Commission and place it with the Mississippi Development Authority.

EDITOR’S NOTE: This is the 10th in a series of stories featuring candidates in the Lafayette County area leading up to the November general election. We will feature those candidates in the contested county supervisor races as well as House District 12 and Senate District 9. The candidates are meeting with the EAGLE in editorial board sit-downs in the coming month.

Gray Tollison is pleased with his efforts in the Senate for the past 19 years and wants the residents of District 9 to send him back to the Capital where he can continue his leadership and use his record of experience to advance Mississippians.

The 51-year-old attorney said in his time in the Senate he has advanced to be chairman of the Senate Education Committee, a role that brings value back to his home of Lafayette County and its schools.

“I grew up here in Oxford and I was shaped by the community,” he said. “Education is part of this community. You have the university, two great, strong school systems. And I went down there to try to improve public education, when I was first elected, and that is what I continue to do. It’s certainly not an easy task but the past four years I have been in a position as the chairman of the Senate education committee to really affect change.”

He said a chairman makes a difference in directing policy and he can continue working with key officeholders in state government to get things accomplished.

“I feel like I have built a lot of rapport and trust with my colleagues and we’ve been able to pass good legislation and I think we are starting to move the needle,” he said.

“If a measure of a candidate is how much money they have put towards education, in my time I’ve increased funding by about $1 billion since 1996 and teacher pay has increased from about $27,600 in 1996, to today it’s probably about $43,300. I’m proud of those accomplishments, but we obviously have to do more.

“Mississippi is a poor state. We have the highest poverty rates and we have limited resources, so we have to be smart with how we spend our money. Actually, we have to be smarter than other states if we are going to leapfrog them. That’s what we are trying to do. The legislature wants to be more prescriptive in how it spends its money.”

One example of smarter spending is the third-grade reading gate, he said. All teachers and administrators in kindergarten through 12th grade have access to the training. Another newer implementation Tollison said is beneficial is putting money into the school coffers to help them with their greatest needs.

“I want to continue the work we’re doing and I think there’s more work to be done. I think we need to further implement those programs that have been enacted,” he said.

Tollison said another effort he has helped lead in the Senate the past few years is pushing to get school superintendents appointed instead of elected. He said there are roughly 130 elected superintendents in the U.S. and half of them are in Mississippi. It is now up to the various counties to change it since the House will not advance the bills, and he said it is especially critical to have appointed superintendents that can be brought in to the smaller counties where there aren’t qualified candidates. He said knowing what all of the state’s counties need is crucial for his role.

“It does matter when you have an effective voice down there that will be heard,” he said. “I feel like I have delivered results over the years. We have a lot of state money coming to this community,” including $83 million in general fund money to the University of Mississippi; about $29 million for the two school systems in Lafayette County; and the North Mississippi Regional Center and the hospital draw in Medicaid funds.

While Tollison said Initiative 42 would bring more funds to education in the state, it would have consequences.

I-42 is the citizen amendment offered to change the state constitution and force legislators to fully fund education to the extent that the Mississippi Adequate Education Program requires, which lawmakers have not fully funded in recent years.

“42 I think changes our basic structure of government,” he said. “It allows, regardless of what anybody says — I’ve been in chancery court and know what the laws are — it would allow a Hinds County judge to determine how much money would be adequate and efficient, and regardless of what anybody says we want to phase in, it doesn’t matter once it goes into the hands of a judge, a judge makes that decision.

“I do think this will have unintended consequences if it happens.”

He said there’s currently no need for 42 since the legislature is gradually phasing in money, like I-42 calls for.

Tollison frustrated many voters by switching parties the day after he won the last election and becoming a Republican. He still feels that was the correct choice.

“I just think I have always had a conservative voting record and certainly four years later it was a choice that I think was the right choice,” he said. “I guess I grew up around a father very involved in Democratic politics and that was in my household, but I became my own person and realized that is where I needed to be.

“I hate it for politics in the country but obviously you’re seeing parties moving to the edges of the room. I just felt like in this state and where I stood I was a conservative Democrat always. There’s no room for a conservative Democrat in that party anymore, and I’m not the only one who has made that choice in the state over time. I guess I was a little late in making that decision.”

As a Republican, when it comes to the budget and fiscal policy, he wants to see more efficiency and says the 19th century model the state is operating under doesn’t work.

He also vows to continue toward infrastructure improvements to accommodate the growth the area is seeing.

“This community is going to continue to grow and we need to address those infrastructure needs,” he said, but it’s more than roads. It’s water, sewer and other daily needs, and he said there are ways to bring federal assistance to Lafayette County to address those needs.

“I’m a lawyer by profession, but I think it is helpful in this position to have experience and I think it works to the benefit of representing this community at the state capital,” Tollison said. “I can assure you I am a much better legislator than I was when I went down my first term and I think that experience makes a difference because I’m much more effective. I know how to get things done down there and I think because this community is becoming more important to the Mississippi economy, I think it’s that much more important to have an effective voice representing us down at the state capital to make sure our needs are heard and our voice is heard down there.”