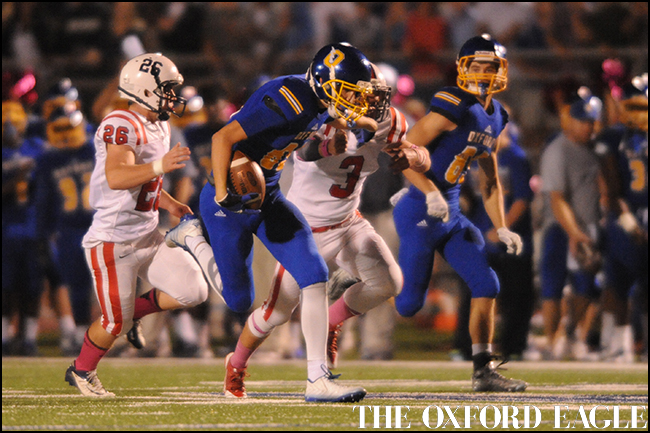 Oxford celebrated its homecoming in style with a 56-21 win over Lewisburg on Friday at Bobby Holcomb Field. The Chargers improved to 5-2 and 3-0 in Region 1-5A play while Lewisburg fell to 2-6 and 0-3 in the region.

The Chargers were able to steamroll Lewisburg while being able to work on aspects of their game that needed the most help. Luckily for Oxford coach Johnny Hill, there were not many areas that needed improvement.

“It was a complete game offensively, but defensively we need to tackle better,” Hill said. “They got a little too much yardage, but all in all, the effort was there and they didn’t back off. That is all you can ask for.”

Senior quarterback Jack Abraham looked confident in the pocket and ended the game going 15 of 18 for 230 yards and three touchdowns. Abraham got help from the running game and especially Josh Patton, who ended the game with 114 yards and a pair of touchdowns on only 12 carries.

Patton averaged 9.5 yards per carry, and with help from the offensive line, Patton had his best game of the season. Patton is helping fill in for the injured Drew Bianco, whose shoulder injury has ended his season. In honor of Bianco, wideout D.K. Metcalf wore the No. 8 jersey and wore it well, finishing with 84 yards and one touchdown on six receptions.

Hill was pleased with his team, and this is only a footprint in the journey to get back to the Class 5A state championship game for the Chargers.

“We are playing against ourselves,” Hill said. “We have got to get better, and you can’t just turn it off and on. You have to play and get better.”

The Chargers proved to be the better team Friday with Hill adding, “The team has really bought into that and they have done just that. I have been really proud of them the last couple games.”

Outside of tackling, the only negative aspect of the Chargers’ game was the accumulation of 140 penalty yards on 18 flags.

“It was a good game. We played hard and played aggressive,” Hill said. “It’s part of the game, but we’ll try to cut that out. They scored a touchdown because there was a shove after the whistle, and there’s no place for that on the football field.”

Oxford will travel to Columbus this week to face a pass-oriented New Hope team in another region matchup. But with region matchups on the schedule the rest of the season, Hill said the Chargers will be ready for the task.

“They throw every down and we haven’t seen that this year, so that will present some problems to us,” Hill said. “We are going to be ready. There is no reason not to be ready.”