FEELING THE RUSH: Pass rush shows up for Rebels’ defense 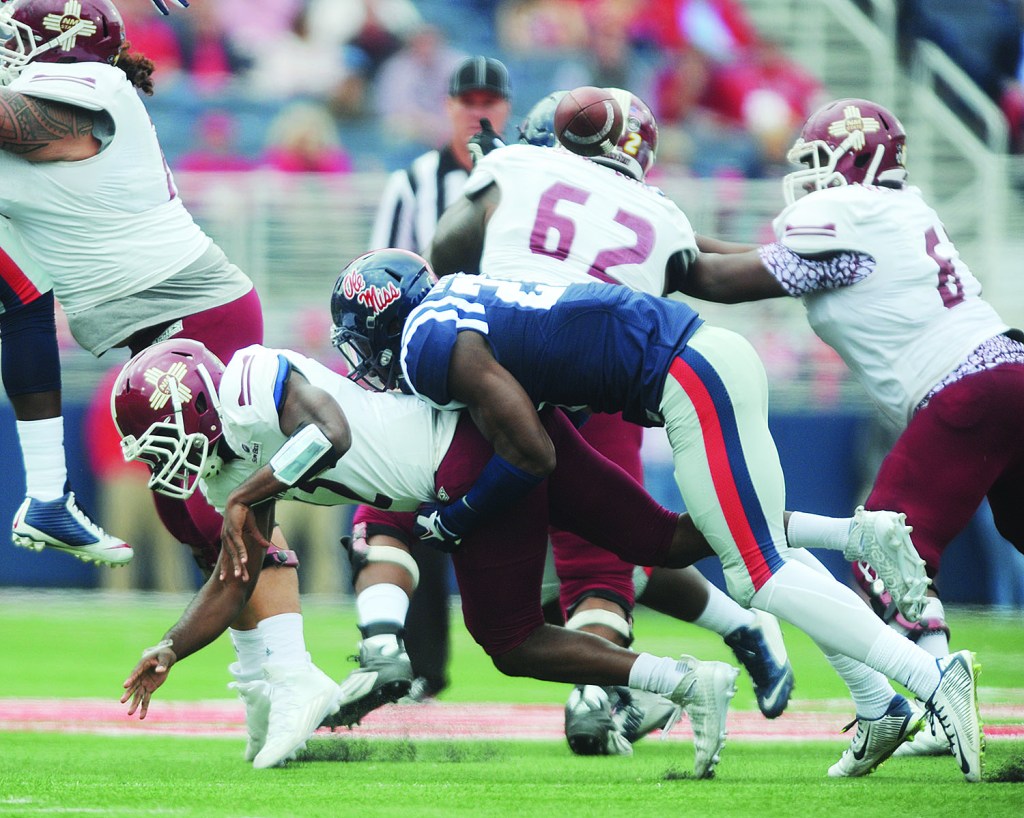 Ole Miss’ defense had been missing one key ingredient the first half of the season — a pass rush.

Ole Miss was next to last in the Southeastern Conference with five sacks through the first five games entering the game against New Mexico State, which averages out to just one sack per 60 minutes.

For a defense that is considered to have one of the most dominant front lines in college football, that stat seemed out of place.

“It was good to get the pass rush going again,” defensive coordinator Dave Wommack said. “It’s nice to cut those guys loose on some plays and let them do what they do up front. We had some good coverage at times, and we’ll just continue to get better.”

End Marquis Haynes had two sacks as well as one pass breakup and a forced fumble. In his first start at middle linebacker, Terry Caldwell recorded a sack after being blocked initially then recovering and still bringing the quarterback down.

Along with the four sacks, the defense pressured the quarterback four other times and swatted down two more balls to go with Haynes’ batted ball.

One of the reasons attributed to the lack of sacks was due to the opposing quarterbacks getting passes off at a much swifter rate than they had last year. Whatever the issue has been this year, the Rebels figured it out, at least for one Saturday.

The pressure on the quarterbacks aided the interceptions by Mike Hilton and Trae Elston. The pocket was collapsing quickly Saturday and forced the Aggie quarterbacks to rush their throws, and a couple balls found their way into the arms of awaiting Rebel defenders.

“It helped us out a lot,” Elston said. “At first they weren’t containing that QB a lot. Then everybody started doing their own job, and that’s when that QB rush started kicking in and I guess we started getting those turnovers then.”

With an important date with Memphis this week looming, the defense will need to bottle the momentum it gained with the pass rush against New Mexico State if it wants to enjoy the same success.

It will be tough as the Tigers’ offensive front has only given up seven sacks through five games.

“We got a decent rush,” head coach Hugh Freeze said. “We had a couple quarterback scrambles that bothered me a little bit, and we should have done a few things differently there. When we all were on the same page with our coverage, it was pretty dang good.”