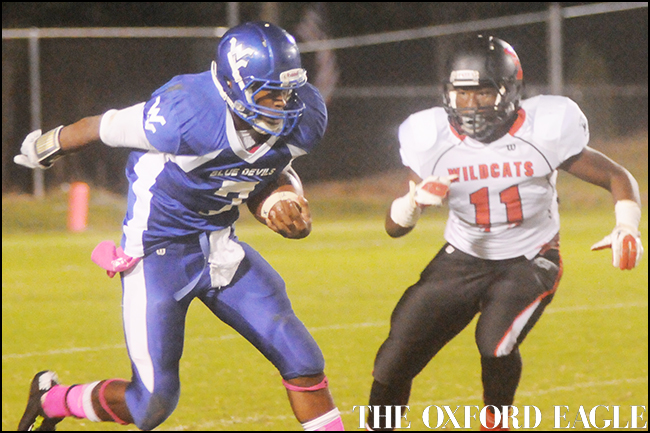 WATER VALLEY — The rain may have been coming down, but the numbers on the scoreboard were going up.

Water Valley scored its most points all season on its way to its first Region 2-3A win with a 35-14 victory over Independence at Bobby Clark Field Friday night.

The Blue Devils (3-5, 1-1 Region 2-3A) used a balanced offense and a stingy defense to defeat the Wildcats for the sixth consecutive time.

Senior Kirkland Horton did it all for Water Valley. He had three touchdown passes and rushed for another.

He missed a couple of games to begin the year due to a lingering leg injury but has slowly worked his way back onto the field on both sides of the ball.

Friday night, he proved he was nearly, if not already, 100 percent.

After a three-and-out to start the opening drive of the game, Horton led the offense on two consecutive scoring drives that ended with touchdown passes of 39 and 19 yards, respectively.

Hartley Camp and Quez Towns were on the receiving end of those passes. Towns and Horton connected again on a 26-yard touchdown pass to end the first half to put Water Valley up 20-7 after a missed extra point. Running back Taghee James also had a touchdown on a 6-yard run.

Horton proved to be deadly on defense as well, recording a sack to end Independence’s second drive of the night.

The rest of the Blue Devils’ defense proved to be up to the task of slowing down a Wildcat rushing attack that had already racked up more than 1,500 yards in its first seven games. Independence (5-3, 1-1) was forced to punt on four of its five first-half possessions.

It would have been a perfect 5-for-5, but a muffed punt by the Blue Devils allowed Independence to continue the drive and score a couple plays later to make it 7-7 late in the first quarter.

The Wildcats’ only other score came from the defense when Water Valley had a snap sail over quarterback Ty Varner’s head for the scoop-and-score during the fourth quarter to make it 33-14. A Water Valley safety would give the final winning margin.

The Blue Devils will host North Panola in their final home game of the regular season Friday.