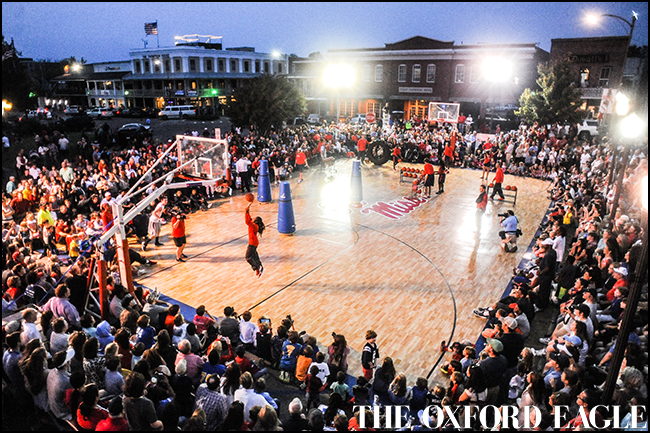 Whether involved directly in the homecoming festivities or a passive bystander of the events, the Square Jam was enjoyed by a variety of people Friday night.

The events started with a homecoming parade that snaked from the Grove to the Square and finished with the fourth annual Square Jam in front of City Hall.

“I’m fascinated by the energy of it,” Al Morse said.

Morse, 25, is coastal native from Gulfport. She sells books at Square Book Store, makes bone art and plays the ukulele as a street musician.

She moved to Oxford last year, but was not a part of homecoming. This year is her first time to be present. During the parade this year, she worked upstairs in the coffee shop, but was still able to hear the crowd while people stood on the balcony.

“I think this still might be a definitely uniquely Oxford thing,” Morse said.

After the parade was over, fans gathered in front of Oxford City Hall to watch the University of Mississippi men and women’s basketball teams show off their skills for the upcoming season.

Onyii Okoye, 23, is biology major from Clinton Mississippi, who was in the parade, but attended the later event as well.

Okoye played Tuba in the parade, but his favorite part of being involved was marching through the city playing the fight song.

He said it is different from the games because, although the games are more exciting, but the fans are far away. In the parade, the fans are up close and can hear all the stadium tunes up close. He said he likes to see the younger children jumping up and down when the band marches by.