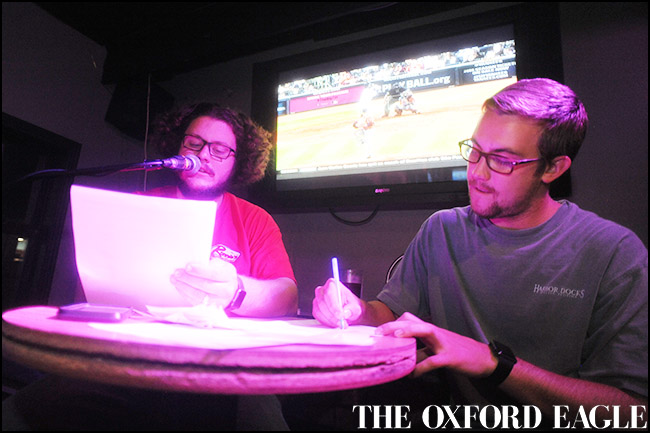 For the Oxonians who think they know it all, attending a local trivia night could prove otherwise.

The Blind Pig and Frank and Marlee’s host trivia teams and test their skills in a variety of categories.

“Who doesn’t like a good competition?” said Frank and Marlee’s owner Todd Lynch.

Lynch’s trivia night takes place Tuesdays at 7:30 p.m. It has been going strong for a couple years. He said he tries to come up with a wide array of questions.

“I pull some questions from current events in the news, some from different websites I come across, and some from various books I have,” he said. “I also use suggestions from people playing and try to put together a couple of categories from those suggestions.”

The variety makes the night interesting, but it is not unnecessarily hard. Lynch said the questions are not rocket science.

“It is a good variety of questions as to not single out any one group of people’s knowledge base.”

Jennifer Nelson has been hosting Monday trivia at 8:30 p.m. at The Blind Pig for the past three and a half years since March 2012. Nelson started it originally with her friend, Ramona Brawner.

Nelson and Brawner went to the owners and asked if they could start it. The duo hosted for about a year and a half together, but Brawner’s teaching job took precedence. Later Bruce Butler Nelson co-hosted together until last July. Nelson has been hosting solo ever since.

Nelson makes questions for the game herself, but uses friend and Internet suggestions as well.

“When I’ve had co-hosts, we’ve split the categories. But now that I do it solo, it’s all me,” she said.

Participants separate into teams of no more than eight members and choose a team name.

Most team names are funny or include quiz puns.

Nelson announces the category and calls out each question and at the end of the round, after taking up the answer slips, she announces the correct answers.

Categories range from sports, music, general knowledge, movies and more. On the Facebook page for Blind Pig Trivia, Nelson will post a picture as a clue for a wild card round that can be anything remotely related.

Nelson said she thinks trivia nights bring people together because it is fun and does not have to involve drinking.

“Probably my favorite memory was the night we had about 100 people playing,” she said. “There wasn’t a free seat in the place. We had been doing it for about two years at that point and had had pretty good crowds, but nothing like this. That’s when I knew we were doing something right.”

Both venues give out cash winnings generated from entry fees. The Pig gives out cash prizes for first, second and third. The amounts depend on how many people enter.

Frank and Marlee’s gives out cash for first prize winners. Lynch said they also try to give second place a little prize. He said he always jokes that third place gets to select something from the lost and found, but he still hasn’t had any takers.

“My favorite thing is the randomness that the players can come up with, like crazy team names and answers to questions,” he said. “Makes me laugh every time.”

Why daffodils matter this season