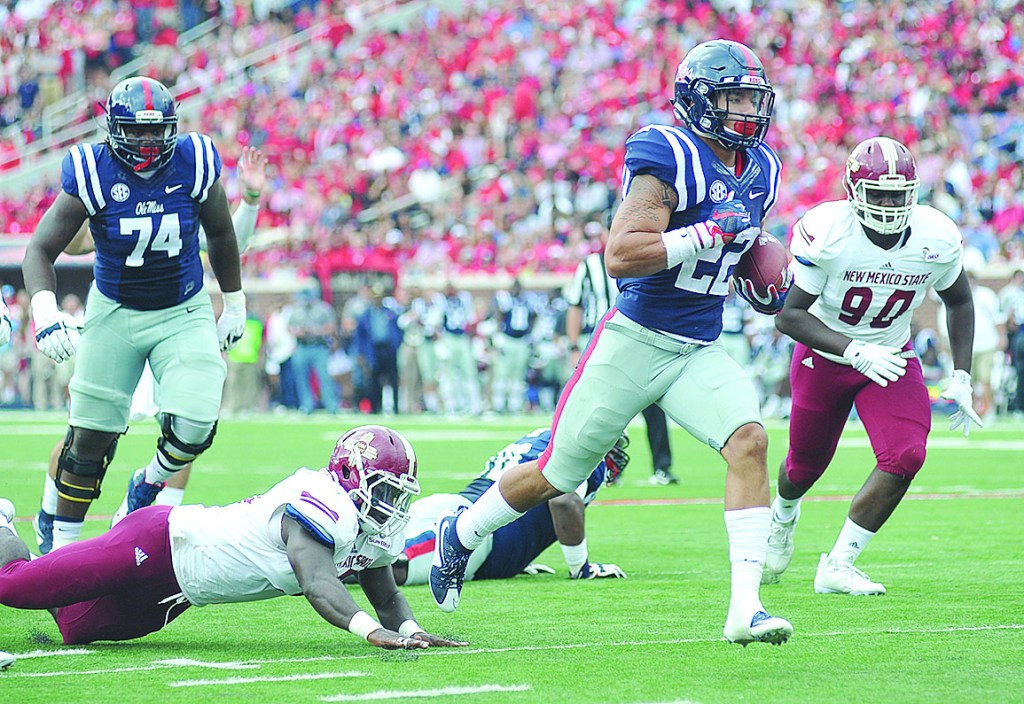 Success for Ole Miss wasn’t necessarily measured by the numbers on the scoreboard Saturday.

Playing without six starters, the 14th-ranked Rebels grabbed a lead big enough to empty their bench in the final two quarters, cruising to a 52-3 homecoming win over New Mexico State in front of 60,154 at Vaught-Hemingway Stadium.

Guard Justin Bell, center Robert Conyers and Laremy Tunsil, who missed his sixth straight game as the NCAA continues its investigation into possible rules violations, all watched in street clothes as did middle linebacker C.J. Johnson, who joined Tony Conner on the laundry list of injuries after having surgery to repair his meniscus earlier this week.

Tight end Evan Engram and defensive tackle D.J. Jones went to the bench in the second half with injuries Ole Miss coach Hugh Freeze didn’t have an update on after the game. While the big plays returned on offense and a reshuffled defense limited an overmatched New Mexico State squad to 239 yards, a pair of muffed punts and a fumble on special teams along with the occasional coverage bust left Freeze with a mixed review of his team’s performance as the Rebels (5-1) prepare for a string of Southeastern Conference games that will be much more competitive.

The patchwork offensive front didn’t have much trouble handling the overmatched Aggies (0-5) as Ole Miss rolled up a season-high 665 yards, including 265 on the ground.

Quarterback Chad Kelly played three quarters and completed 24 of his 33 passes for a career-high 384 yards with three touchdowns and an interception, though the junior got away with some dangerous throws into coverage early. He also ran for a 4-yard score to make it 31-3 with 1:18 left before halftime.

“I just can’t throw over (line)backers. You’ve got to throw through holes,” Kelly said. “Find the hole if you have to wait an extra second, but we’ll get better.”

There were plenty of them against New Mexico State.

Kelly’s first touchdown pass covered 66 yards to Markell Pack with his last going for 37 to Laquon Treadwell at the end of the third quarter before giving way to Ryan Buchanan and DeVante Kincade. Treadwell also had a 20-yard touchdown reception and finished with eight catches for a career-high 136 yards.

“Solid but still too many decisions that could’ve resulted in negative plays,” Freeze said of Kelly before taking some of the blame for making calls “we hadn’t worked all week.”

Ole Miss began the game allowing opponents to convert 40 percent of their third downs, and the Aggies converted their first three on a 12-play opening drive to set up Parker Davidson’s 39-yard field goal. But the Rebels got off the field on 11 of the Aggies’ final 15 attempts.

“That first series it’s kind of hard to see how the team is going to come out and attack you,” safety Mike Hilton said. “After that first drive, we settled in, made our checks and calls and had much better rhythm out there than the first drive.”