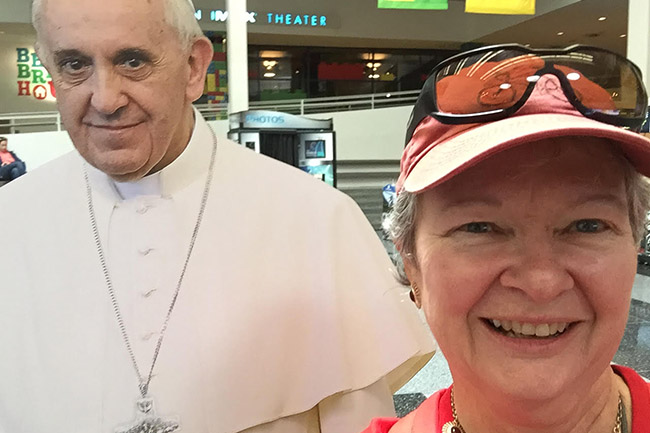 Pope Francis talks about little miracles happening all around us. To find them, we just have to look for them.

Last February, when I learned of Pope Francis’ visit to America I knew I wanted to see him.   “Should I plan a trip to Washington, D.C., New York or Philadelphia?  Should I go alone or with a group?” But by July, something told me, “Just stay home. You’ll be able to see much more on TV.”

Then I met Sister Peter Marie and Sister Beatrice, Dominican Sisters from St. Cecelia’s in Nashville, and Betsey Sawyer from Oxford, at a women’s retreat on the Joy of the Gospel at St. John the Evangelist Church. This community of Dominicans also taught my sons at St. Benedict School in Memphis.  I was so inspired by their enthusiasm about making the trip to Philadelphia for the Festival of Families and the Papal Mass that I booked flights and a weekend home rental in Philly.

As time drew near to my departure date, Betsey Sawyer told me she decided not to go to Philly. She was going to Washington, D.C. to see Pope Francis. I laughed and said that was OK because she had fulfilled her role as my motivational angel!

I was content knowing that I would most likely only see Pope Francis on a jumbotron, and happy to be elbow to elbow with a million other Catholics.  On Friday as I waited in the Memphis airport for my flight to Philly, I marveled at the interfaith service at the 911 Memorial in New York City showing on CNN televisions in the terminal. Where else would you find one man who brings so many different faiths and cultures together to pray; Christian, Jew, Muslim, Hindu, Buddhist and Sikh? Who else on earth feels the imbalance of rich and poor of the whole world along with their joys, pains and sorrows?

I talked to a young man awaiting another flight who was born in Columbia. He escaped to America with his family as a young boy. Ironically, I would encounter more Columbians just 24 hours later.

When I arrived at the Philadelphia airport, I boarded a train that took me to the 30th Street Station. From there volunteers for the World Meeting of Families directed me to the Kimmel Theatre for a viewing of the documentary film, “The Francis Effect.” My first task was to snap a picture at the theater of a life-sized, cardboard picture of Pope Francis and me. Later that evening I found my way to my rental house and met my hosts and another renter, Harold Anderson from Springfield, Massachusetts.

Harold and I walked the 2 miles together to and from the center city for the next 3 days.  Harold was a volunteer interpreter and at the end of each day we miraculously found each other in the massive crowds of people. Our hosts, John and Dawn, are lead pastor and director of music at Grace Church of Philly.

Dawn and I also connected as she showed me her water-damaged 1974 wedding album she was reorganizing. She wore almost the same wedding gown I wore in my wedding in 1972.

Saturday morning as I arrived at City Hall looking for a good place to wait for Pope Francis, I heard a little miracle.  It was a man speaking with a Southern accent.  Lance and his 10-year-old daughter, Mary Ella, are from Birmingham, Alabama. Mary Ella attends a school taught by the Dominican Sisters of St. Cecelia’s, Nashville. Around me was an excited group of about a dozen men and women from Columbia who crowded in and cheered when Pope Francis passed by right in front of us in the Popemobile that evening.

On Sunday I again camped out early to see Pope Francis and attend the Papal Mass on Logan Circle and next to me was a man sleeping on the grass. Was it a little miracle that saw a picture of a couple from Peru on Twitter? A few minutes later, I met a couple from Peru sitting near me. I checked Twitter again and confirmed they were the couple on Twitter and the man sleeping next to me was a journalism professor who posted their picture.

The atmosphere was noisy and festive as the Pope passed by in the Popemobile then quiet and solemn as the Mass began. As a cantor, the best little miracle was singing with thousands of others during Mass and receiving communion as priests filed down the street with consecrated hosts under the cover of yellow Vatican umbrellas.

Harold and I arose early Monday to attend 7:15 Mass at the Cathedral then we had breakfast and I said farewell to Harold. That left me plenty of time to go to the Vatican Splendors Exhibit at the Franklin Institute before heading to the airport.

I am so glad I had the courage to go alone, to be truly happy and look for little miracles. I found these and other miracles. All I had to do was look for them.