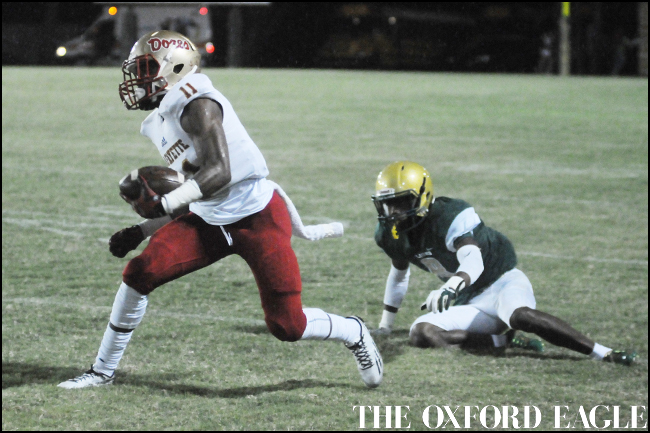 TUNICA — Kevin Perkins was slipping away from Lafayette.

“I think early we struggled tackling him some,” Lafayette coach Eric Robertson said after watching his defense chase Rosa Fort’s dual-threat quarterback around for four quarters. “He broke some tackles on us.”

But the Commodores eventually bottled up Rosa Fort’s biggest playmaker while getting their usual contribution from their own on a rainy Friday night to turn a region showdown between the top-ranked teams in Class 4A into a runaway 30-7 victory.

Senior running back Tyrell Price ran for more than 200 yards for the fourth time this season, racking up 214 and three touchdowns on 31 carries. His last score came on a 4-yard scamper late in the fourth quarter as the top-ranked Commodores (7-1, 2-0 Region 2-4A) handed the No. 2-ranked Lions (6-1, 1-1) their first loss and put themselves in the driver’s seat for a second straight region title in the process.

“I know they’re one of the best teams out of this region,” Price said. “We came out here and beat them 30-7. We’re in good shape.”

Price has run for at least 100 yards in every game but the opener and has more than 1,400 yards and 20 rushing touchdowns. He gave Lafayette a 9-0 lead midway through the first quarter with a 5-yard scoring run just minutes after an errant snap on Rosa Fort’s opening possession went out of the back of the end zone for a safety and added a 61-yarder for a 23-7 lead with 7:18 left in the third quarter that almost never happened.

“(Quarterback) Will (Ard) had kind of run into me a little bit and I had stumbled,” Price said. “Then I looked up, and I seen I had just one missed tackle (to make). Then I seen green, and I hit it.”

Perkins found the going much tougher against Lafayette’s defense.

The fleet-footed signal caller came into the game averaging more than 10 yards per touch with 16 combined touchdowns and got loose a few times early in the wet conditions, cutting Lafayette’s lead to 9-7 with a 3-yard touchdown run with 3:15 left in the opening quarter.

The precipitation tapered off in the second half, and the Commodores, who have held all but one of their opponents to 14 points or less, zeroed in on Perkins and the rest of the Lions, limiting Rosa Fort to less than 50 yards of offense in the final two quarters and less than 200 for the game.

Lafayette answered the Lions’ only score when linebacker Quin Jones scooped up a fumble at the end of a Rosa Fort punt return and returned it 22 yards to push the Commodores’ lead to 16-7 late in the first quarter. Jones also intercepted Perkins on the Lions’ final possession.

“Being the team that we is right now, playing that big game and winning this big game, I think it’s a big confidence boost right now,” Jones said.