Rebels ‘hopeful’ to get injured players back soon 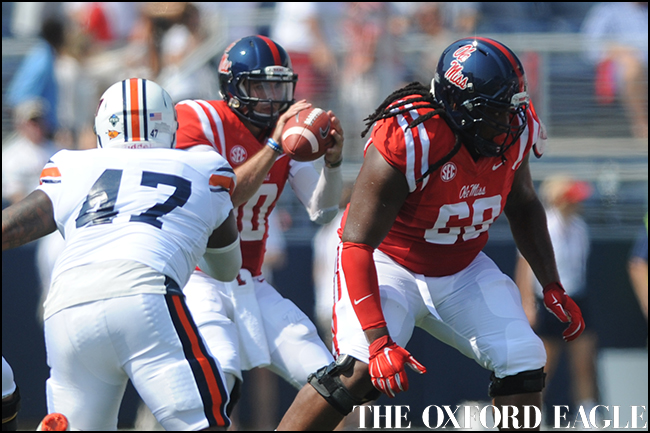 Hugh Freeze knows he won’t have Tony Conner or C.J. Johnson back for at least a couple more weeks. But Ole Miss’ coach is optimistic the rest of his players making up a lengthy list of injuries are close to returning as the 13th-ranked Rebels begin the second half of the season.

“Other than the ones that are out for significant stretches of time, I’m hopeful that we’ll get them all back,” Freeze said.

The offensive line has gone the last three games without right guard Justin Bell, though the senior has dressed out for each despite a nagging ankle injury, while center Robert Conyers didn’t play Saturday to rest a sprained knee he’s dealt with since the second game of the season. An ankle injury to guard Javon Patterson threatened to keep him out of Saturday’s blowout win over New Mexico State, but the true freshman “ending up feeling good enough to go,” Freeze said, and got most of the snaps until the game was well in hand in the second half.

The injuries on the interior of the line have made for a four-man rotation at guard among Patterson, Aaron Morris, freshman Jordan Sims and sophomore Rod Taylor, whose surgically repaired shoulder is “getting better each week,” Freeze said.

Running back Jaylen Walton and wide receiver Damore’ea Stringfellow were also held out of last week’s game with unspecified injuries, but Freeze said both should back for this Saturday’s game at Memphis (11 a.m., ABC). Tight end Evan Engram and defensive tackle D.J. Jones didn’t play the second half against New Mexico State, and Freeze didn’t know the severity of their injuries immediately after the game.

The defense, which was also without reserve cornerback Kailo Moore on Saturday, lost Conner after the Alabama game to a torn meniscus and Johnson to the same injury in the Rebels’ lone loss to Florida. Both will miss at least four weeks, meaning the earliest either one would be back is Oct. 24 against Texas A&M.

The Aggies are one of two ranked teams on the schedule for Ole Miss (5-1, 2-1 Southeastern Conference) in the final six weeks of the regular season, but first up is the trip to the Liberty Bowl in five days to take on a team that’s just outside the AP top 25 in the Tigers (5-0), who have won 12 straight dating back to last season.

“We’re a beat-up team right now,” Freeze said. “Hopefully we can keep our kids healthy for this stretch run. It’s going to be fun because we’ve got some really competitive games coming.”