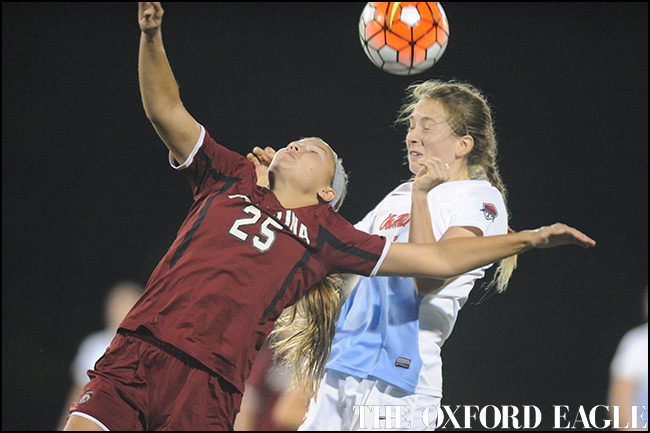 After going 110 minutes to earn a hard-fought win over Arkansas just two days ago, the Rebels needed to carry the momentum and energy into a Sunday night contest versus a top-10 opponent. Ole Miss did just that by getting out to an early lead once again as redshirt junior Georgia Russell scored her first goal of the season in the fourth minute of the game. Russell dribbled past a defender up the flank, shot, and scored off a deflection from the keeper that would sent the ball rolling between her legs to put the Rebels up 1-0. It was the fifth time this season the Rebels scored in the first five minutes of the game.

“We come out with a lot of energy,” said Coach Mott. “We always talk about coming out, running hard and setting the tone early and we’ve done that. We need to give credit to our senior leadership. Those guys know what it’s like to come out flying.”

The Rebels played stout defense for 90 minutes. Redshirt freshman goalkeeper Marnie Merritt collected four saves and defended three corner kicks to earn her fourth individual shutout of the season. The defense was at its best late in the game, only allowing one shot in the second half.

“They’re dangerous,” noted Mott. “We had tired legs, and we needed to add another number back there just to secure it. Those guys (South Carolina) did a good job. They had a dangerous chance towards the end.”

After a dangerous South Carolina free kick in the 89th minute, junior Addie Forbus iced the game on the counter attack. She collected a pass on a breakaway and took a shot, but it was saved by the Gamecock goalkeeper. However, Forbus stayed with the play, recovering the rebound and finishing smoothly for her ninth goal of the season to put the contest out of reach, 2-0, with 40 second remaining.