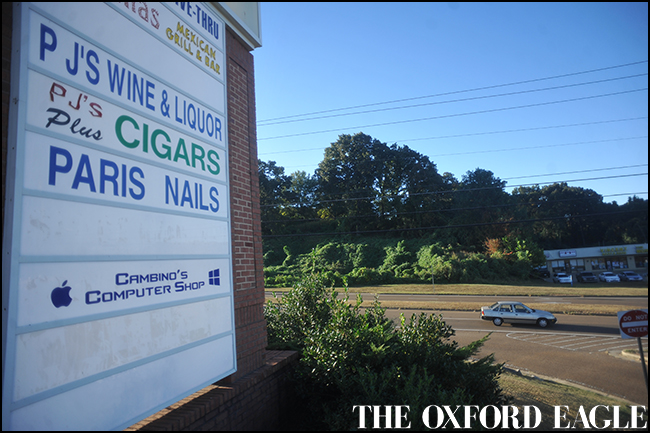 PJ's Wine & Liquor and PJ's Plus Cigars, in Oxford, Miss. on Tuesday, October 13, 2015, will relocate to this location across University Avenue from Kroger.

With businesses located in the Kroger shopping center needing to find new homes as Kroger prepares to expand, PJ’s liquor and cigar shops will be housed in a brand-new building together that will include a rooftop smoking area.

Developers with Heritage Builders presented the site plan Monday at the Oxford Planning Commission for the new 7,314-square-foot, two-story building that will be on the south side of University Avenue, across from Kroger on a vacant lot, situated between the Texaco service station and a small strip mall.

The first floor will be the liquor retail store and the second store will house the cigar retail store. Owners also plan to make a rooftop-smoking lounge for customers. There also will be an open deck that wraps around most of the building on the second floor.

Commissioners were concerned about the traffic trying to cross University Avenue when leaving the building.

There will be only one point of ingress and egress into the business with a right turn only when exiting the property.

Clearing the property for construction will require the developers to mitigate 36 trees or pay into the city’s tree mitigation fund.

— Approved a 4-foot side yard setback for Greta and Jason Bailey at 114 Phillip Road.

— Granted a parking variance to the Old Town Shopping Center.

— Approved a 20-foot yard setback and a 15-foot rear setback for property located at 110 Vivian St.

— Approved the site plan for Goose Creek Mall that will expand Rebel Rags. It’s located on the west side of Mall Drive and south of West Jackson Avenue, behind the existing strip mall that contains Rebel Rags, along with Bim Bam Burgers and Jimmy Johns. Developers want to add a 6,400-square-foot addition to Rebel Rags business. The total size of the new building will be 12,800 square feet that will house new retail businesses.

— Approved the site plan for Massey Rentals, a five-unit condominium project at 2657 Anderson Road. Several people spoke out against the development, saying it will cause flooding issues and increased traffic issues on the already busy Anderson Road. However, the developers met all the city’s requirements and storm water plans have been approved. The commission tabled the request last month to allow builders to make some changes to address some of the neighbors’ concerns. Developers relocated the building footprints that created a larger buffer between the development and surrounding properties. It was zoned Two-Unit Residential in 2004. Commissioner John Bradley said the neighbors were victims of poor zoning planning but since the development is zoned Two-Unit Residential, and meets the city’s requirements, he “could not find a reason to vote against it,” although he sympathizes with their complaints.