TUNSIL RETURNING: Lineman to miss another game, return for A&M 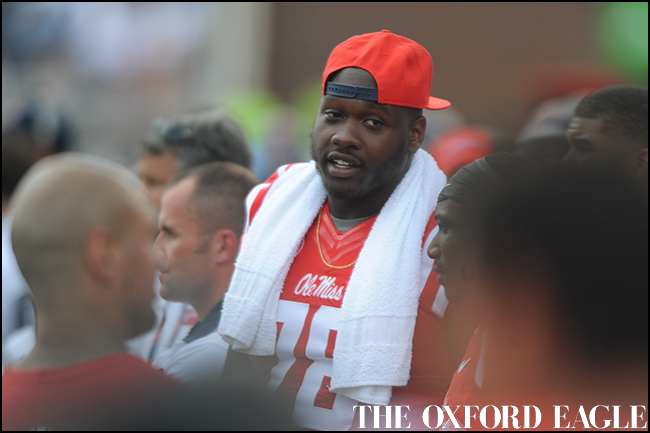 Ole Miss will have its best offensive lineman on the field for its next Southeastern Conference game.

Laremy Tunsil has received a seven-game suspension from the NCAA for receiving extra impermissible benefits and will be able to return to competition against Texas A&M on Oct. 24. The school announced the NCAA’s ruling Monday night, bringing a conclusion to a saga that began in the summer.

Tunsil was held out of the Rebels’ first six games as the school worked with the NCAA to look into possible rules violations and will miss Saturday’s game at Memphis (11 a.m., ABC) after the investigation found Tunsil used three separate loaner cars over a six-month period without payment, had a four-month interest free promissory note on a $3,000 down payment on the purchase of a car, stayed two nights at a local home, used a plane ticket purchased by a teammate’s friend and used a rental car for a day, according to a school release.

According to the release, Tunsil also wasn’t forthcoming when initially questioned by NCAA investigators about the loaner vehicles but later told the truth and apologized. The seven-game suspension was handed down as part of reinstatement conditions, which included demands that Tunsil pay the value of the extra benefits to charity, perform community service and make the down payment on the vehicle.

“I take full responsibility for the mistakes I made and want to thank everyone for their continued support,” Tunsil said in a statement. “I want to apologize to my teammates, coaches and the entire Ole Miss family for how my choices affected our program. This was a learning experience, and I’m looking forward to being back on the field with my team and redeeming myself.”

Ole Miss announced before the season opener against Tennessee-Martin that the junior offensive tackle would be held out as a precaution as the school worked with the NCAA to look into possible rules violations. The school released another statement before the Fresno State game the following week that said, in part, the team has “been preparing as if Laremy Tunsil will not play” and that “we have been assured that everyone is aggressively seeking a resolution.”

In June, Tunsil was involved in a legal bout with his stepfather, Lindsey Miller, that eventually resulted in Miller alleging that Ole Miss provided Tunsil with extra benefits during his recruitment, accusations which led Ole Miss to launch an internal investigation.

“The last 10 months have been a physical and mental battle for me, but I love playing this game more than anything else,” Tunsil said. “I want to be here for my teammates who are depending on me to finish what we started together.”

Ole Miss coach Hugh Freeze has been asked on a weekly basis about Tunsil’s status and said following Saturday’s win over New Mexico State and again Monday morning that the team expected a resolution early this week, adding “there’s some confidence” that it would happen. Asked if Tunsil would immediately take over at left tackle again should he be cleared to play, Freeze said,

“We have been supportive of Laremy throughout this process, and we are thankful he can return to competition starting with the Texas A&M game,” Freeze said in a statement. “More important than his football ability is his character, and I am confident that Laremy will grow from this experience and continue to be a positive member of the university and our football team.”

The 6-foot-5, 305-pound Tunsil was a first-team All-SEC preseason selection and is a projected first-round NFL draft pick.