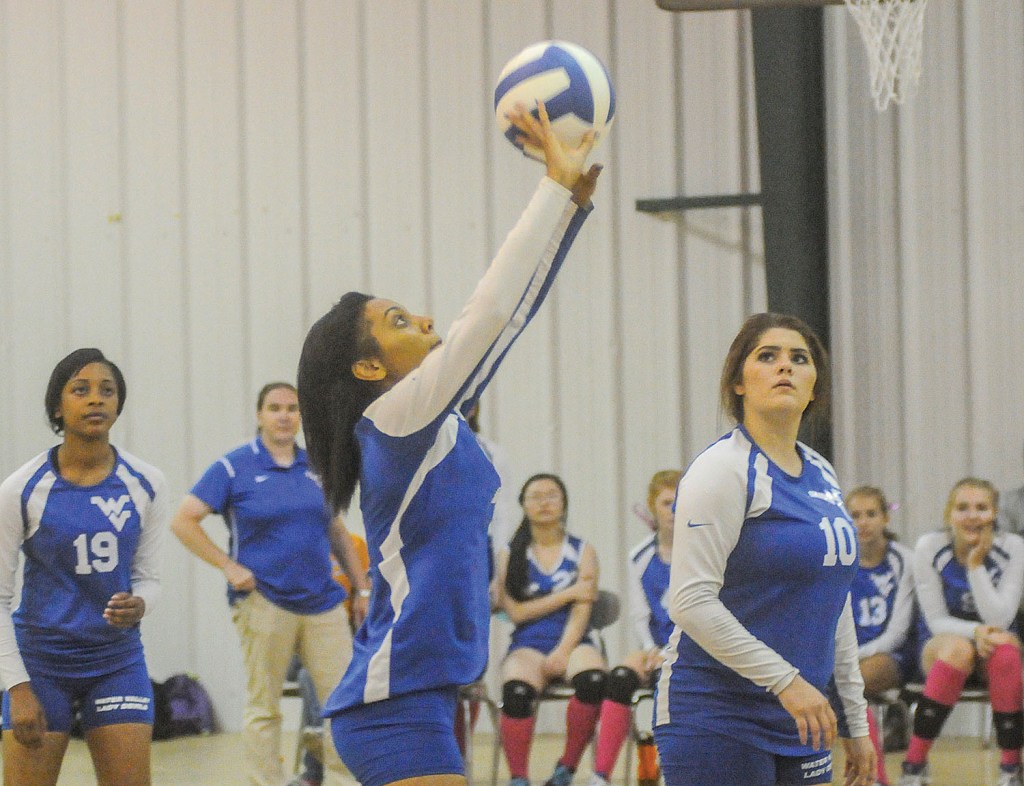 WATER VALLEY — It did not start out pretty, but Water Valley righted the ship and coasted into the history books.

It was a monumental victory for Water Valley, which clinched the Region 2-1A/3A title a couple weeks ago, as the Blue Devils completed their region schedule without a blemish.

It is the first time in school history the Blue Devils (11-2, 6-0 Region 2-1A/3A) finished undefeated in region play.

“They’ve put in many, many hours of work, and they want it,” Water Valley coach Casey Clouse said of her team’s effort. “They want it this year, and I feel like the athletic ability is there and their attitudes are there. It’s just fallen in together this year.”

The match started out shaky for Water Valley as East Side jumped out to a 5-2 lead early in the first set and stayed ahead through the first half. The Blue Devils figured things out and pulled away late to claim the set victory.

“We did a new set (of players) as far as what we have out there and swapped a couple of people around,” Clouse said. “So they were just trying to get in rhythm, and when they did, they were fine.”

The lineup consisted of the same group of starters that’s taken the court all season, they were just in new positions. Clouse was working with her outside setters in preparation for the level of competition that awaits in the playoffs next week.

Once the newly positioned lineup found itself, the Devils outscored East Side 50-13 the final two sets.

As has been the case for a lot of teams, the level of competition in region play and out of region play has been a roller coaster, causing teams to have to adjust and find a happy medium.

That has been an issue for Water Valley.

“It seems like either we’re too far up or too far down,” Clouse said. “It’s hard to find those middle teams that push you to the limit.”

Having won the region title with nearly a month left to play in the regular season, Clouse took the opportunity to try and iron some things out and try to get her team as prepared for the postseason as possible.

“It gave us several games to be able to say, ‘OK, now we want to do this for the bigger, more powerful schools,’ versus us trying to right there at the end place or win the district. … There’s always things you can work on. We want to work on our front row net blocking. We haven’t had to worry about that versus the teams that we’ve played, but the teams that we will play (in the playoffs) do those things, and that’s what we want to train them.”

Winning a region title is always a goal for a team when it begins the season, and for some, that is all they aspire for.

Water Valley is hungry for more than a region championship. The Devils feel they can compete and extend their season as far as it can go.

“We won the region and that was very exciting to them, but they really want to go as far as they can into the playoffs,” Clouse said. “What they’re looking for is to play their hardest every game and give it all they got and the best team comes out the winner at the end. We do hope for it to be us deep into the playoffs.”