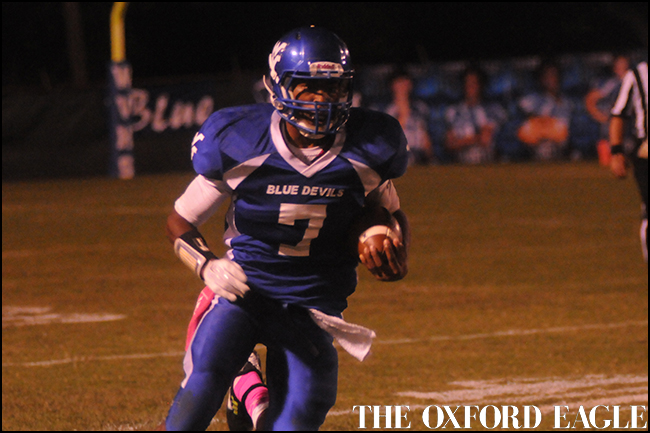 It has not been the type of year Water Valley was hoping for, but the Blue Devils are starting to turn it around.

After earning their first Region 2-3A win of the season, the Blue Devils would like to keep righting the ship Friday when they host North Panola for their final home game of the season. It will also be Senior Night for the 13 Blue Devils who will take Bobby Clark Field for possibly the final time in their high school careers.

“It’s a good group of boys,” Water Valley coach Brad Embry said. “Normally, when they were ninth- or 10th-graders, they’ve been more successfully in the win column. This past year we’ve not been so successful as far as wins, but we’re getting better. One thing I’ve said a lot these past few weeks is I’m really proud of the mental toughness of these kids. Being able to bounce back and practice well after a defeat. That takes a special person.”

The Cougars (3-4, 0-2 Region 2-3A) come in searching for their first region win after losing to M.S. Palmer and Charleston the first two weeks of region play.

More running
North Panola has relied on the play of freshman quarterback Kenneth Jefferson to lead the offense. Jefferson has completed 29 of 74 pass attempts for 561 yards, 11 touchdowns and three interceptions. The Cougars have relied heavily on the ground game, which has been a common theme for Blue Devil opponents this season.

If the Blue Devils (3-5, 1-1) want to earn region win No. 2, they will have to win the battle in the trenches as with most football games.

“Most of the time, that’s the case in football, in my opinion,” Embry said. “Offensive and defensive lines are where games are won a lot of the time unless it’s just a complete mismatch. Most of the time, iwt’s going to be won on the line of scrimmage, and I don’t see this one being any different.”

With senior Kirkland Horton returning to form over the past couple of weeks and having an impressive performance on both sides of the ball against Independence, the Blue Devil offense is starting to look how Embry hoped it would all year.

“I’ve been pleased with Kirkland since he got back,” Embry said. “I’ve been pleased with Ty (Varner). His improvement as a young kid is getting better each week. Things were bad at times. You get a kid thrown in there early when he didn’t think he was going to have to. The positives you take from it is you’ve got two experienced quarterbacks, which we didn’t have for a while. You look at things as a positive, and maybe that will help us through the rest of region play.”