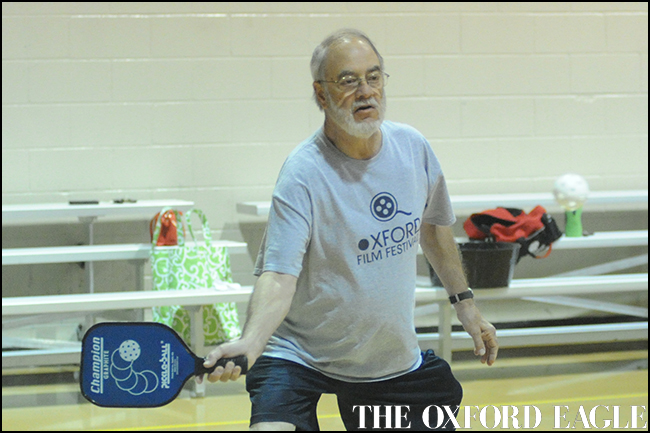 Bill Lawhead plays pickleball, which is sponsored by Leisure Lifestyles, at the Oxford Activity Center in Oxford, Miss. on Thursday, October 15, 2015.

After five years of being completely funded through athletics, members of the Oxford Park Commission wants the Leisure Lifestyles program to start becoming self-sufficient.

The program costs about $50,000 a year to run, which includes the salary of part-time director Deb Helms, and several instructors, as well as equipment for the various programs.

Last year the commission brought up the possibility of starting to charge Leisure Lifestyles participants $5 a month to take part in the program. The board tabled the discussion in hopes of finding other revenue sources like grants.

The city and Lafayette County both contribute $5,000 toward the program.

On Wednesday, the commission told Helms she has one more month to present some type of revenue plan to the commission before they take matters into their own hands.

“I think we’ve been patient,” said Commissioner Marvin King. “We know it’s a great program. We also see it as an equity issue. We charge summer day campers $250 for four weeks. The reason athletics can support programs like Leisure Lifestyles is because they are charging for their programs. We need options to vote on and choices, otherwise, it’s time for us, as a board, to consider how that revenue is going to be raised.”

King told Helms to bring an action plan to the November meeting to show what she’s been doing to try to find other revenue sources.

“Otherwise, we can make it happen,” said Commissioner Don Frugé, who wants to implement whatever fees necessary to generate income.

Frugé  told Helms he didn’t feel she was trying hard enough to find revenue for the program.

“From your comments, I don’t get the sense you’re going to try to find revenue,” he said.

Helms said she has been working on it and has talked about creating a foundation where people can donate to the program.

Helms has said if the city charged her participants $5, she fears many would stop coming because most senior citizens live on fixed income.

Leisure Lifestyles is geared to adults over 40 and offers a variety of free educational programs, including computer classes and health and exercise classes. The program also offers sports activities, like pickleball and volleyball and cooking and art classes.

King suggested charging for the Leisure Lifestyles T-shirts that are currently given away to members.

There are currently 650 people who are members of Leisure Lifestyles. At $5 a month, about $39,000 could be generated, assuming all those currently signed up keep attending.

Helms said she would return next month with a report on her progress of coming up with revenue sources.

To demolish, or not to demolish pondered by historic…