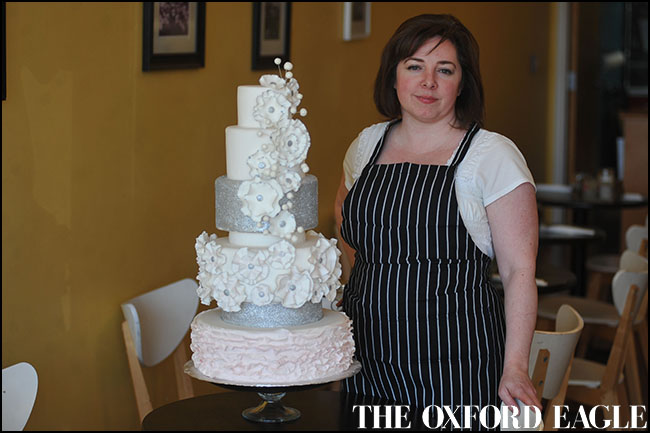 Shannon Adams shows off one of her specialty cakes she creates at Honey Bee Bakery, which is transitioning from a restaurant to a catering business.

Honey Bee Bakery has always been a family business.

The store originally opened in 2008. Shannon Adams and her mother went in as business partners. Shannon did the baking while her mother handled the books. Her three brothers worked at the restaurant in different capacities and her father helped out in the kitchen.

“I’ve been baking since I was little,” Adams said. “My mom taught me how to bake. We center our whole business around the philosophy that my mom taught me about food. She always made food at home from scratch. She always cooked simply and that’s what we try to do here. I believe everyone should be able to eat well.”

Adams attended the University of Mississippi and graduated in 2006 with her bachelor’s in fine arts focusing on ceramics. She said that she really enjoys working with her hands and wanted to continue to do so. Eventually she began the process for opening what would become Honey Bee Bakery.

At the time Adams set things in motion with a business plan and selecting a location, her brother Chris was graduating from the Colorado Art Institute’s culinary school and he came on board as the restaurant’s chef.

The Adams family is growing and changing, forcing the family business to do a little changing of its own.

“My mother is retiring this year,” Adams said. “I have one brother that has moved away, another that is in the planning to move away and another brother that has taken another job. So that leaves my dad and me.”

Honey Bee will no longer operate as a restaurant but the bakery will be expanding so that Adams can focus on catering to the area’s high demand for handcrafted cakes.

“I do a lot of specialty cakes. Not novelty cakes like Colonel Reb but things like large, sculpted wedding cakes,” Adams said, gesturing to a shelf above the bakery’s front counter where there sits a large tiered cake with hand crafted flowers spilling down one side of the confection. “There’s nowhere else in town that makes cakes like these from scratch so it’s an open market right now.”

The restaurant portion of Honey Bee Bakery will be closing its doors on Dec. 6.

“We announced the closure at the beginning of the semester,” Adams said. “We’re hoping to give each of our employees plenty of time to find another job as well as the chance for everyone to come by and eat here one last time.”