ON THE ROAD AGAIN: Chargers look to stay perfect in region at New Hope 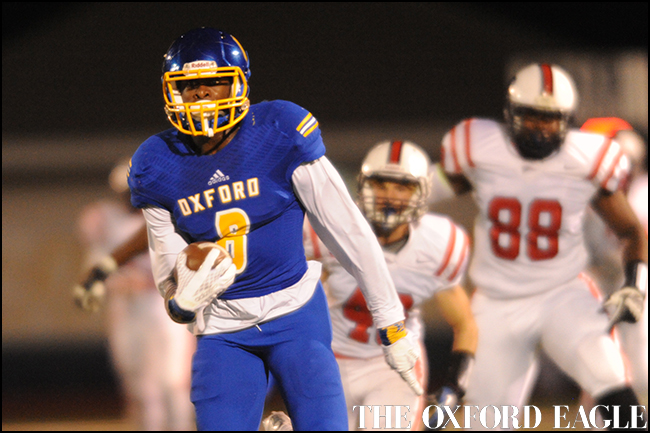 It is another week in high school football, and another road game awaits Oxford.

The first region road game was to winless Saltillo. Two weeks later, is it more of the same as the Chargers will travel two hours south to Columbus to take on New Hope on Friday.

The Trojans are not winless on the season, but they have not been able to knock off the zero in the win column two weeks into Region 1-5A play. Oxford coach Johnny Hill still finds them to be more than a speed bump toward another region title.

“They’re a pretty good football team,” Hill said. “They haven’t won a region game, but they’ve been close with good teams and had the lead at some times. I think they’re pretty dangerous offensively and not bad on defense.”

New Hope (1-6, 0-3 Region 1-5A) has an offense similar to that of the Chargers (5-2, 3-0) with a receiving corps that can burn defenses if given time. Trojan quarterback Thomas Stevens has completed 99 of 208 pass attempts for 1,113 yards and five touchdowns. He has been off the mark at times with eight interceptions.

Stevens has a trio of targets he likes to throw to in Terryonte Thomas, Carlos Brooks and Andre Erby. The group has combined for 836 yards and three touchdowns.

Hill compares them to his receivers, who can pick up the slack if one guy is having an off night.

“You’ve got to cover everybody,” Hill said. “You look at the stats and (Erby, Brooks and Thomas) are kind of their go-to people. But they have other guys who can catch, too. It’s kind of like us. You’ve got to stop D.K. (Buford), but them others will kill you if you don’t cover them. I’m sure they are kind of in that same boat.”

Defensively New Hope lost a lot on defense from last season and is a bit younger. From what Hill has seen on tape, he feels his high-octane offense that is averaging more than 50 points a game in region play can exploit some of that inexperience.

“They’ve lost some speed, and I’m hopeful we can get behind them and utilize our speed versus their speed,” Hill said.

New wrinkle on offense
During last week’s 56-21 homecoming win over Lewisburg, Oxford’s staring center, Colton Skidmore, found his way into the end zone on a run play. It was something the Chargers had been working on for a couple weeks and found the right time to introduce their newest threat on offense.

It was not a one-time deal as Hill pointed out they may have found their version of former Chicago Bears great William “Refrigerator” Perry.

“It’s just to give them linemen something to cheer about,” Hill said. “They work their tail off in the trenches every day. They’re very excited to see a lineman score. … We think if it’s to our advantage, we’ll be able to use it. (Skidmore) is a load. He runs low behind his pads, too. He’s our Refrigerator Perry.”