For and against state flag rallies held on Ole Miss campus 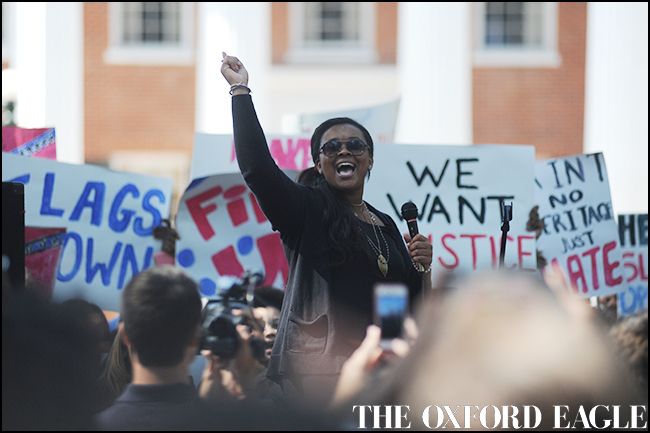 A rally calling on the University of Mississippi to remove the Mississippi state flag from university grounds, was held on campus Friday. 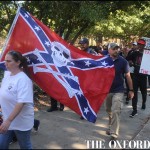 Individuals for and against the removal of the state flag being flown at the University of Mississippi gathered on the Ole Miss campus this afternoon with University Police reportedly keeping the peace between the two groups.

The University of Mississippi chapter of the NAACP staged a rally calling for the removal of the Mississippi flag, which contains the Confederate battle flag emblem. Their protest comes a few days before the Ole Miss Associated Student Body Senate is scheduled to vote Tuesday on a resolution to remove the state flag from campus.

Meanwhile, a faction of the Ku Klux Klan reportedly staged their own rally on the campus with both groups shouting at one another. The EAGLE will report more on this story as it develops, as well as in Sunday’s print edition.

“We commend our students for using the democratic process to engage in debate over civic issues.

As a state institution we fly the flags representing our state and nation. However, as a university committed to fostering a welcoming and inclusive campus for all students, we continue to join other leaders in Mississippi to encourage our government to change the state flag.

Over the last few years our community has engaged in an open discussion about  our campus’s physical environment — our building and street names, public art and landmarks.  We want our campus to reflect who we are in 2015: a vibrant, welcoming and diverse community that honestly examines our history as we move forward together.  To that end, we are committed to placing landmarks in historical context and to telling more of our story as we add to our campus landscape.   We are thankful for the engagement of faculty, staff and students that guided this process and provided good direction for our community.”

The rally took place on the Circle where a crowd of students, including multiple members of the ASB and other groups, gathered underneath the shade and the flag. Afterwards, the speakers got off stage to answer questions from the press and public while the majority of the crowd dispersed. Within minutes a group of men, women and children carrying the Confederate flag walked toward the Circle.

University Police Chief Tim Potts said, “anytime you have such an issue that people are passionate about on opposites sides, you are going to have a heated debate. We are proud of how our students represented themselves when confronted with the counter protest group.”

The opposing Confederate group was escorted peacefully off campus and no arrests were made.

Potts said UPD is very grateful for the assistance of the Oxford Police Department and the FBI.