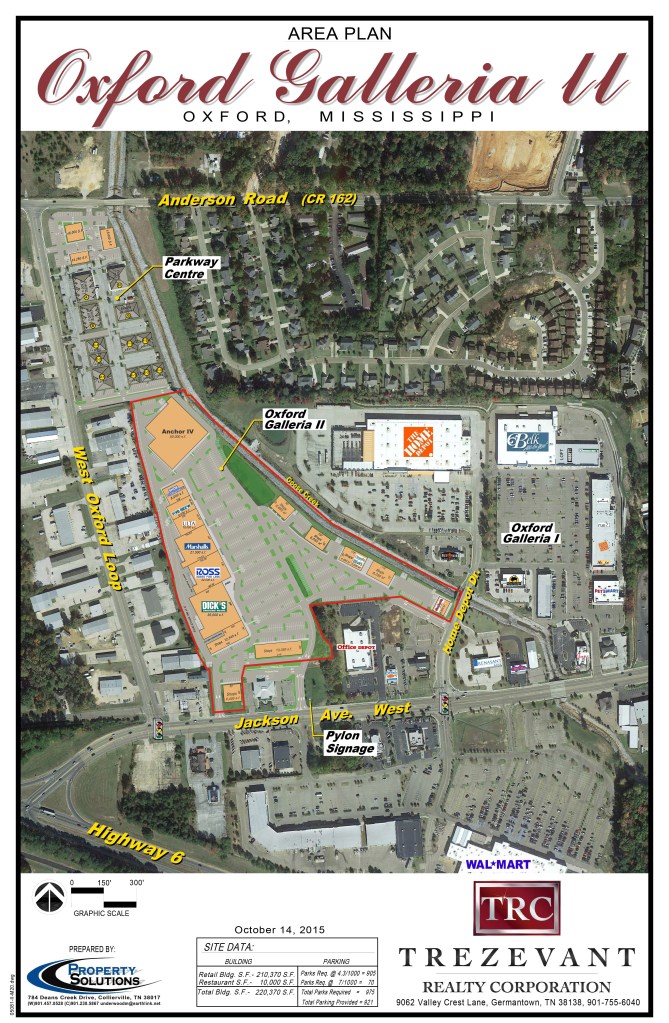 John Trezevant, president of Trezevant Realty, has announced the names of several national relators that will soon be calling Oxford home in the future Galleria II shopping center set to open in the summer of 2016.

The site has been cleared and dirt pads for the stores are already in place. Actual construction is set to begin in November.

The new center will be 250,000 square feet of retail business and restaurants with a value of $45 million.

“It will be twice the size of Galleria I,” Trezevant told the EAGLE Thursday.

Some of the businesses coming to Galleria II are: Dick’s Sporting Goods, Ross Dress for Less, Marshall’s, ULTA, Five Below and Shoe Carnival. Restaurants include Mugshots Grill, a gourmet hamburger eatery, and Coyote Blue Restaurant and Bar with an outside patio.

The entire development will consist of 25 businesses. Trezevant said he would release the names of the remaining businesses early next year.

When the center is complete, Trezevant said at least 1,000 jobs would be created to add to the jobs already being created through the construction.

“It’s a huge economic impact to the area,” he said, “that will trickle out into the region.”

Galleria I has been a success, Trezevant said with the businesses doing “very well.”

“We have several business that want to expand, including Belk, Rack Shoes and Rue 21,” he said.

The shopping center replaced the former Ewing Mobile Home Park. Prior to the land being cleared, Trezevant said he helped relocate 37 trailers around the county.

“When we first announced plans for the shopping center, one woman who lived in the park started saving up some money that she put down to purchase some land in the county for her trailer,” Trezevant said. “She then offered spots to three other trailers. We made a landlord out of her.”

Trezevant said the residents at the mobile home park were all polite and pleasant to him and his company during the relocation process.

Taylor Trezevant is director of leasing for the project and is responsible for bringing in the merchants. Kui-Mew Wong of Wong International Architects is designing the shopping center. Williams Engineering of Oxford is handling the engineering work and Bank of Oxford is financing some of the construction.

Trezevant said he hopes to have most of the construction complete around May so retailers can get into their stores and start designing and decorating.

“Some may open as soon as May and others in June,” he said.