TALL ORDER: Lynch, ‘explosive’ Tiger offense up next for Rebels 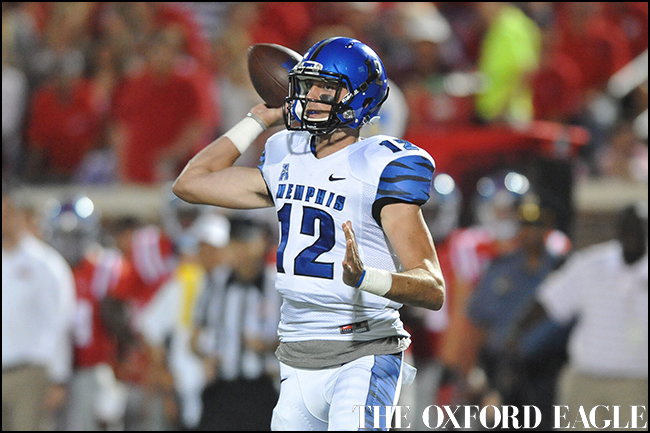 After combining to win just five games in the three seasons before head coach Justin Fuente’s arrival in 2012, Memphis is riding the third-longest active winning streak in the Football Bowl Subdivision.

The Tigers’ resurgence can be attributed to one of the nation’s most potent offenses with players Ole Miss safety Mike Hilton said are “explosive at every position.”

There’s one in particular that’s providing most of the fireworks.

Quarterback Paxton Lynch has the combination of size and strength most signal callers envy. Lynch is one of the tallest quarterbacks in the nation at 6-foot-7 and has an NFL arm attached to his 245-pound frame. The big-bodied junior has put it all together in his third year as the Tigers’ trigger man.

Lynch operates the controls of the nation’s fourth-best scoring offense (48 points per game), throwing for 1,535 yards and 10 touchdowns. Memphis ranks 12th nationally in passing offense with Lynch throwing for more than 300 yards in each of his last four games.

With the ability to tower over just about every player on the field, opponents find it hard to bring him down or even get in the way of his passes. He’s completing 71 percent of his attempts and has yet to be picked, helping the Tigers to a 5-0 start and 12 straight wins dating back to last season entering Saturday’s game against the 13th-ranked Rebels (11 a.m., ABC).

“Any time you have a quarterback that has that type of vision, it’s going to be an advantage,” Ole Miss coach Hugh Freeze said. “It’s obviously not the only thing he does well, but that is a good gift to have. The guy’s completing 70 percent or so of his passes. Vision is a big part of that.”

Lynch, who’s been starting since he was a freshman, is just 3,593 yards away from moving past Danny Wimprine as the school’s all-time leading passer, but he may not be around long enough to make a run at it. Lynch is shooting up draft boards and comes in at No. 17 on ESPN draft analyst Mel Kiper Jr.’s updated Big Board for next year’s draft.

“Everything goes through him,” Hilton said. “One thing that really stands out is under pressure, he’ll stand there, make the throws and take hits.

“He’s one of the best-kept secrets in college football.”

But Ole Miss (5-1, 2-1 Southeastern Conference) has seen him before.

The Rebels are making the return trip to Memphis after the Tigers visited Vaught-Hemingway Stadium last September. The increase in competition level got to Lynch as he completed just 13 of his 31 passes for 81 yards in Ole Miss’ 24-3 win. He was also sacked four times.

“I like hitting tall quarterbacks because it gives me a good time to really bring my strengths and hit him in the rib cage,” said defensive end Marquis Haynes, who had one of those sacks, causing Lynch to fumble.

But the Tigers’ offense this year is nothing like last year’s, which scored 44 points or more just three times. This year’s group has done that in four games already.

“You just don’t see (Lynch) taking many chances, forcing the ball into coverage or throwing over ‘backers or late balls in the flat,” Freeze said. “He has an understanding, and he’s taking care of the ball for them. With his arm strength and skills, it makes for a pretty good guy to have back there.”

Ole Miss nearly matched its season total up to that point with four sacks last week against New Mexico State. The Rebels may need to generate that kind of pressure again against one of the nation’s best signal callers.

“I see that they’ve gotten really better since last year,” Haynes said. “We’re going to try to scheme up against their offensive plays like we did last year and hope a good outcome will come out.”