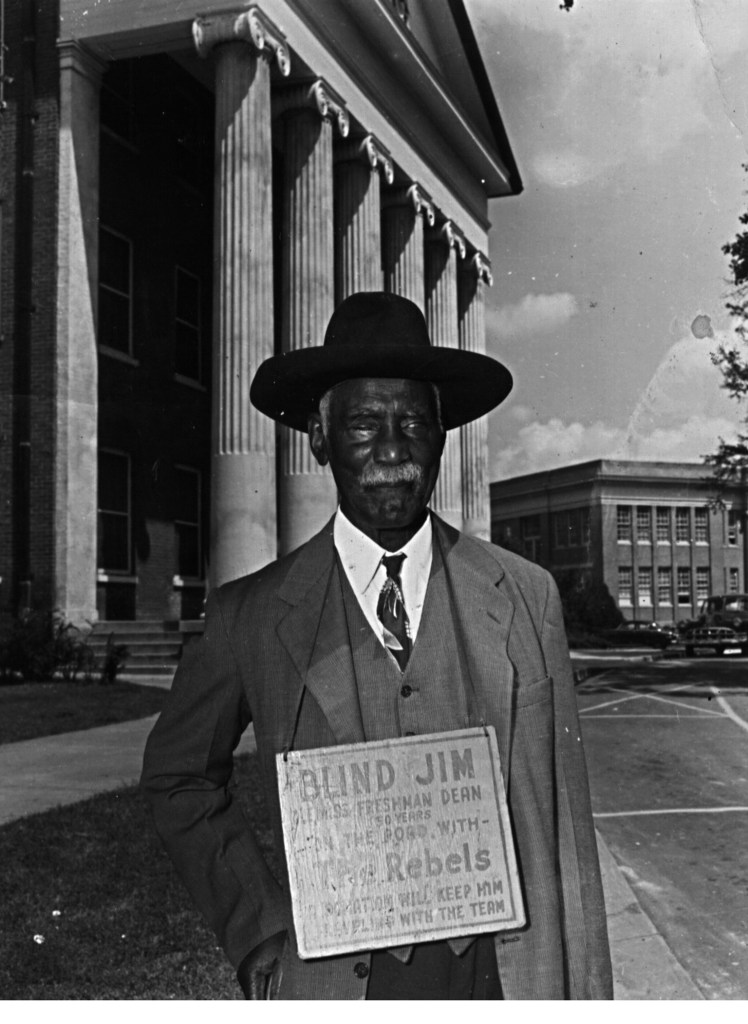 With football season in full swing and alumni and friends of the University returning to the Grove and the campus for weekend games, a great many of the old alumni and friends remember the booming voice of Rebel cheers that were led by “Blind” Jim Ivy. He was the self-styled “Dean of Freshmen” and would tell you when asked, “We’s going to win all our games and I expect to be right back in that Sugar Bowl come next New Year. I’se been to more Ole Miss games than any other man who lived, and never seen them lose yet.”

The story of Blind Jim starts on a sharecroppers’ farm in Alabama in 1872. As a teenager he came to Oxford in search of work. In 1892, while working on the construction of the Tallahatchie River Bridge just north of town, he got coal tar paint in his eyes. Blind Jim could not afford medical help so he used old family remedies from his close friends. These remedies would not give him his eyesight back, and he would later state that there were some things in which friends could not help.

Several years later in 1896, Ivy wandered into the university baseball park during a game between Ole Miss and the University of Texas. The Longhorns were leading by a hefty margin when a student told Ivy how bad the Ole Miss team was losing. Ivy began cheering the home team on in his loud booming voice. The team was strangely inspired by Ivy’s enthusiastic cheering, and won the game decisively. From then on, Blind Jim became a fixture on the Ole Miss campus and at most athletic events.

Not long after his arrival on campus, Blind Jim proclaimed himself as the “Dean of Freshmen.” Members of the freshman class were assigned to guide him about campus. On several occasions he had been led by three generations of freshmen from the same family. On Tuesday night of the first week of school, freshmen would gather at the front of the Lyceum. Blind Jim would make a speech to the incoming freshmen about what was expected of them while they were at Ole Miss. He would do this “so they won’t get into any trouble.”

Graduates, returning to the campus, always looked forward to seeing Blind Jim. It is said that he could still recognize many of the former students just by their footsteps. In March of 1923, Schwartz Tailoring Company’s salesman was on campus to take orders and fit male students for a new suit of clothes. The salesman started a fund by giving up his commission to get Blind Jim a new suit of clothes. In accordance with Blind Jim’s wishes the suit was a “snuff-colored” brown.

For many years he operated a candy and refreshment stand in the Lyceum. He would also sell small brown bags of peanuts at the gate to the football stadium during home games. In 1919, the university signed new vendors contracts that caused him to lose his vendor status. The Associated Student Body passed a resolution that was supported by campus officials to allow Blind Jim to keep his vendor station at the cafeteria. Blind Jim had become one of the traditions of Ole Miss. In his humble way, he had become a friend of the entire student body.

On campus, Blind Jim was always ready to reminisce with students about past ballgames, or to solicit donations for his football-traveling fund. He would travel with students to away games and even made a trip to the Sugar Bowl. He was also a mainstay at pep rallies, whether on campus in Fulton Chapel, or at the annual Welcome Back Rebels Party sponsored by the citizens of Oxford at the beginning of each fall semester. The Welcome Back Rebel Party was a street dance and pep rally held on the Square each year, much like the homecoming parade held at present. Blind Jim would speak to the students along with local dignitaries, Ole Miss team captains and coaches, cheerleaders, and campus officials.

Due to his advanced age and health in 1955, he was ordered by his doctor not to exert himself by yelling or getting in a large crowd of people. He said that he didn’t imagine he would feel like traveling with the football team that year, and if he went to the games on campus, he would just sit at the gate. In late October, he died at his son’s home in Chicago. He was buried at St. Peter’s Cemetery in Oxford and a large number of students and campus officials attended a memorial service for him at Second Baptist Church.

For the first time in over 60 years, Blind Jim would miss the homecoming game that year. Ole Miss played the University of Arkansas and beat them 17 to 7. An announcement of his death was made over the public address system at the game. The students and alumni of Ole Miss erected a monument at his gravesite. The inscription on the monument states, “This monument was erected by the students and alumni of the University of Mississippi in memory of James Ivy, who was affectionately known by generations of Ole Miss students as ‘Blind Jim.’ A member of the Baptist church, he was a devoted and consecrated Christian.”

In a 1920 article in the Mississippian, it was written about him, “Blind Jim should be a living sermon for all of us. Laboring under one of life’s most serious physical handicaps he has never given up, has been always the cheeriest person on campus, and had been a loyal a supporter as our school has even had. He numbers among his acquaintances some of the South’s greatest sons, and has as his friends, all of the University’s students.”

At the Ole Miss versus Houston game in October 1964, the Pride of the South Band paid respect to Blind Jim by forming the work “Jim” and playing “Do You Recall.” The letters represented the beloved figure, Blind Jim, a character dear to the hearts of many alumni.