COLUMN: Time for Ole Miss to scratch idea of balance 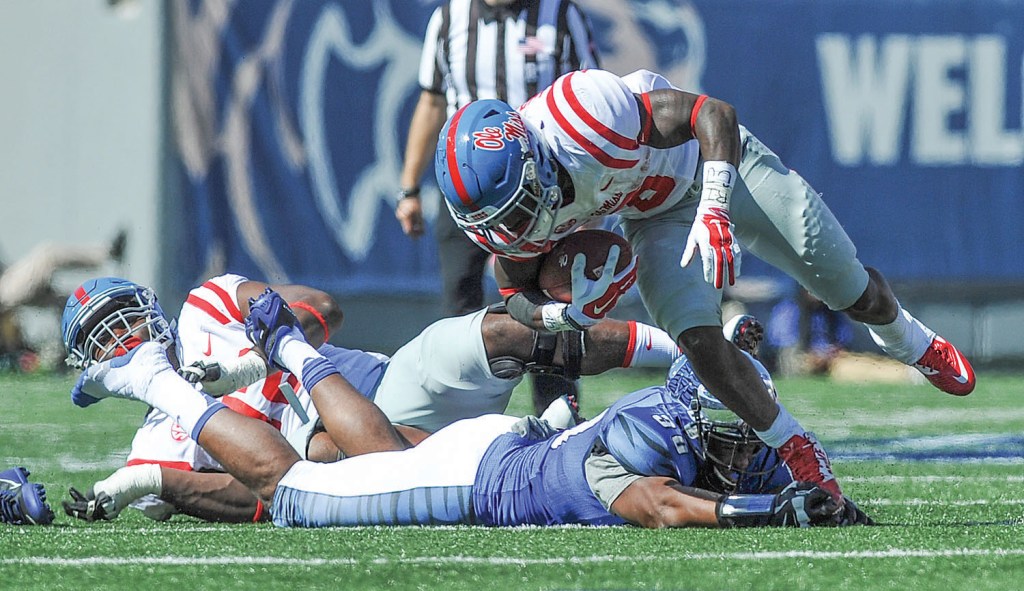 MEMPHIS — I used this space after Ole Miss’ win over Alabama to make my case that the Rebels were a legitimate national title contender.

That was then, and this is …

Well, this is bad.

Where do you begin following a 37-24 loss to Memphis that really wasn’t that close after the first quarter and has likely dashed any hopes Ole Miss has at a playoff berth?

The defense — well, the pass defense — is horrendous right now. Yes, Paxton Lynch is one of the nation’s hotter quarterbacks on one of the nation’s hottest teams, but it looked like Memphis’ signal caller wasn’t trying at times Saturday. A quarterback that completed just 13 passes for 81 yards last season at Vaught-Hemingway Stadium was the latest quarterback to rip a far different Ole Miss defense to shreds, completing 39 passes for 384 yards and three scores.

Ole Miss literally looks lost at times on third down. Not that that’s anything new — only three teams were worse in the Southeastern Conference entering Saturday’s game at allowing teams to convert on third down as often as Ole Miss does (39.8 percent) — but pass after pass and run after run got the necessary yardage to keep drives alive as Memphis converted 12 out of 20 times.

But since this defense isn’t anywhere close to the turnover-creating, yard-stuffing, point-reducing unit Ole Miss had on the field a season ago, one thing has become abundantly clear for the Rebels’ offense.

It’s time to do away with balance.

Memphis was just Ole Miss’ latest no-show in the running game. The Rebels ran it 24 times for 40 yards, putting their average distance against quality competition this season — that excludes Tennessee-Martin, Fresno State and New Mexico State — at 2.6 yards per attempt.

Ole Miss will start a string of five straight Southeastern Conference games to end the season this Saturday with Texas A&M. Since last season, the Rebels are averaging 3.6 yards a carry against teams in their own league. Against their first three SEC opponents this year? 2.9.

Meanwhile, you can make the argument Chad Kelly has the best arm talent in the league, and there’s no debate about the Rebels’ talent at receiver. The Rebels began Saturday ranked 11th nationally in passing offense at 339 yards a game and got up 14-0 on Saturday against the Tigers’ porous pass defense with 195 passing yards through a quarter.

Then for some reason, Ole Miss went run-heavy in the second quarter. Not even Robert Nkemdiche could move the pile on a third-and-short that eventually gave Memphis the ball and Nkemdiche a concussion early in the second quarter. While the call to go for it on fourth down late in the quarter from your own 34-yard line was inexplicable by Hugh Freeze, Kelly needed just half a yard on a sneak.

Whether the lack of development at offensive line and running back, the recruiting at those positions or Freeze’s playcalling is to blame — all have the right to be questioned — the fact remains that running the ball has been a running problem for Ole Miss during Freeze’s tenure. Yet entering Saturday’s game, the Rebels had only thrown it three more times (215) than they’d run it (212).

This isn’t a call for Ole Miss to completely abandon the run. No team can do that. Defenses have to be kept honest. But there comes a point when a team has to realize what it is, and I asked Freeze afterward if that time is now.

“Maybe so,” Freeze said. “We’ll have to evaluate that and see what we think going into next week.”

There’s no maybe here. This defense needs help, and this offense isn’t going to provide as much as it needs to in the games to come by splitting the calls 50-50.

After Saturday’s showing, Ole Miss doesn’t look like a serious SEC contender. But it’s time to throw it up and see what happens.