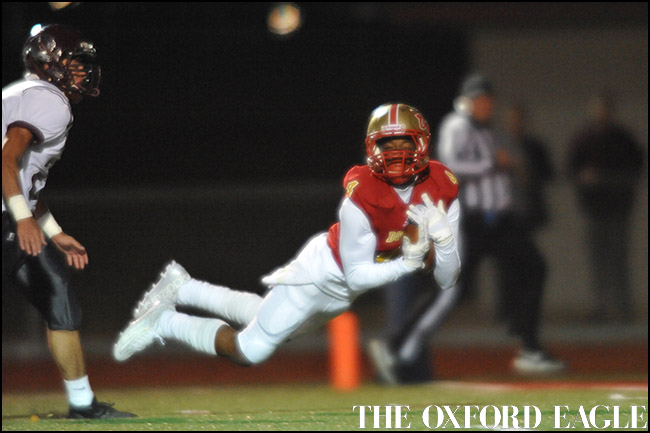 After watching his team exert a lot of energy in a win over Rosa Fort the previous week that made the Commodores the clear-cut favorite in their region, Lafayette coach Eric Robertson feared his squad may have trouble getting up for a .500 team Friday.

Turns out Robertson had nothing to worry about.

Tyrell Price accounted for four touchdowns, Jamarcus Quarles ran for three, and Lafayette inched closer to a second straight region championship with a 49-14 win over New Albany at William L. Buford Stadium. Lafayette, which has won five straight, can clinch the Region 2-4A title with a win at Senatobia (7-1, 3-0 Region 2-4A) this Friday.

“We was worried about our kids not being real focused playing New Albany, who has struggled some but is a better team,” Robertson said. “But I thought our kids came out focused and played fast like we asked them to do early and took advantage of some turnovers and scored and put the game away.”

All three of Price’s rushing touchdowns came in the first eight minutes, and by the time Quarles scored on runs of 12, 13 and 2 yards, Lafayette had six touchdowns before the Bulldogs had a single first down.

“It was good to see that. That’s what you want your team to do,” Robertson said. “That’s what we challenged them with. Good teams come out and play well no matter who they’re playing, and I thought our kids did that.”

Price’s scoring runs covered 66, 1 and 26 yards, and the senior running back snuck out of the backfield to haul in Will Ard’s lone touchdown pass for a 41-yard score to give Lafayette a 49-7 halftime lead. Lafayette scored 28 points off four Bulldog turnovers with New Albany mustering just 156 yards of offense against the Commodores’ defense.

“You can’t turn the ball over and beat any good football team, and Lafayette’s really, really good,” New Albany first-year coach Jake Hill said. “I knew coming in they would be the best-coached team that we’ll play.”

Price, who’s accounted for 24 touchdowns this season, finished with 106 yards on just five carries as the Commodores emptied their bench in the final two quarters. Quarles had eight carries for 43 yards while Ard went 9-for-10 for 184 yards.

“We’ve got a tough one we’re getting ready for next week, but it’s good to have a game like that,” Robertson said. “All the kids work hard in practice and deserve a chance to play.”