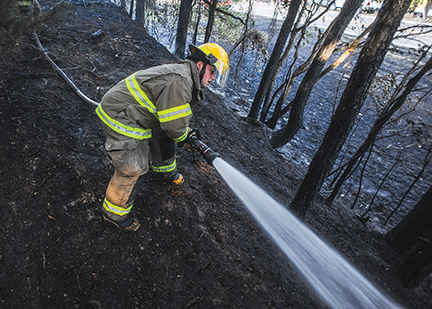 Lafayette County firemen extinguish a grass fire on County Road 303, or Old Taylor Road, at its intersection with County Road 323 in Oxford, Miss. on Friday, October 16, 2015.

Dry and windy conditions had local volunteer fire departments scrambling Friday to put out wild fires that had gotten out of control.

The firefighters were joined by members of the Mississippi Forestry Commission to contain the fires in the county.

According to Lafayette County fire coordinator Jerry Johnson there were two major fires in the county Friday.

“Both of them were set accidentally,” Johnson said Saturday.

One fire was caused when a landowner was sharpening a bush hog blade and a spark set a field on fire. Johnson did not have any immediate information on what caused the second blaze.

Officials in many areas of Mississippi have ordered no outdoor burning due to drought conditions that favor the spread of wildfires. The USDA announced Saturday, that drought disaster aid would be offered in 41 Mississippi counties. Lafayette County is not among them.

Although Lafayette County has not been placed under a burn ban, the Board of Supervisors are expected to take up the issue during their meeting Monday evening.

As of Friday, there were 33 counties in Mississippi under active burn bans.

Officials are urging the public not to engage in any outdoor burning activities until the low humidity and high winds condusive to wildfire activity have improved.

According to a press release, the MFC has responded to and suppressed 468 wildfires that have burned nearly 5,000 acres across the state. The wildfires are also to blame for the destruction of 29 residences, outbuildings and commercial structures.