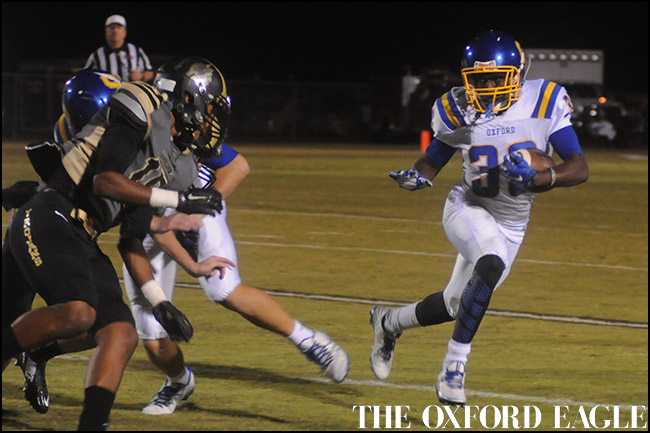 NEW HOPE — Oxford was clicking so well that the Chargers needed only 55 seconds to go ahead by two touchdowns against New Hope.

The fast start by Oxford (6-2, 4-0) was aided by what has become a signature play by head coach Johnny Hill — a recovered onside kick to start the game. Abraham capped a 10-play opening drive with a 10-yard touchdown pass to Ken Presley.

Oxford followed up its first successful onside kick with a second one in as many attempts.

The one-play drive was set up after a recovered sack-fumble by the Charger defense that was caused by senior linebacker Jack Turner.

“I thought my defense played really well,” Hill said. “We finally started to come together as a team now. I’m real proud of the way my defense played and the effort they gave. We became a much better football team tonight.”

The defense was stingy for Oxford as the Chargers forced a Trojans’ punt or caused a turnover on six of their seven first-half possessions. The lone New Hope score in the first half came on a 5-yard run by quarterback Thomas Stevens late in the opening quarter.

The only thing that was stopping Oxford from a more dominant performance on both sides of the ball was the number of penalties accrued. The Chargers had 10 penalties called against them for 80 yards, which ranged from offside by the defense to three personal foul calls.

“When you’re beating a team like that, you’re going to get a lot of flags like that,” Hill said. “Anything close they are going to call it. If our guys are hustling, that’s one thing getting the flag. The others, we’ll get that worked out.”

It was the usual suspects in regards to who scored points for Oxford. It was the first game in region play the Chargers did not manage to reach the half-a-century mark.

They missed it by four points, which could be attributed to the three missed extra points and two missed field goals by Oxford kickers Liam Cooper and Connell Yoste. But the offense seems to have kicked it into another gear once region play began four weeks ago.

“I feel we’re hitting on all cylinders every game,” Abraham said. “I feel that bye week gave us a little time to recuperate.”

100 touchdowns
The seven-touchdown performance on Friday pushed Abraham’s career passing touchdown mark to 102 during his four years at Oxford.

The individual accomplishment is great, but the senior quarterback is still looking at the bigger picture, knowing this is he and the rest of the seniors’ last shot at glory.

“It’s obviously a big achievement,” Abraham said. “It’s not my No. 1 goal. My No. 1 goal is to win state and end coach Hill’s career with a ring. Honestly, it’s a good achievement, but I’ve got to put it behind me.”

Oxford will return home to face Clarksdale this Friday.