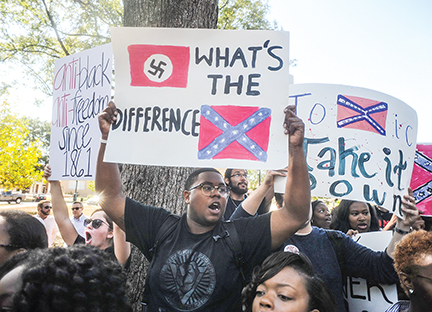 A rally sponsored by the University of Mississippi chapter of the NAACP calling on Ole Miss officials to remove the Mississippi state flag from university grounds was held Friday on campus. 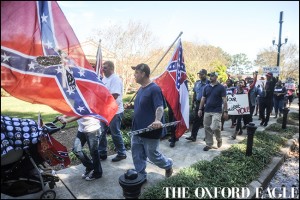 The University of Mississippi chapter of the NAACP held a rally on campus Friday to encourage Associated Student Body senate members to remove the Mississippi state flag, but was met with opposition.

Bobby Ingram, 60, of Oxford refused to comment officially, but said the plaque hanging from off his shoulders should speak for itself.

The plaque read, “MS CODE 37-13-5.” The statute refers to the Mississippi law that states the U.S. and Mississippi flag be flown near schools and requires public institutions of education teach the history of each flag

Dominique Scott, 20, a junior at Ole Miss, said, “It definitely impedes upon our ability to navigate successfully through this academic space.”

The ASB senate members will vote on the issue Tuesday evening, and the results will be announced immediately.

The rally took place on the Circle where a crowd of students, including multiple members of the ASB and other groups, gathered underneath the shade and the flag.

Afterwards, the speakers got off stage to answer questions from the press and public while the majority of the crowd dispersed. Within minutes a group of men, women and children carrying the Confederate flag walked toward the Circle.

University Police Chief Tim Potts said, “anytime you have such an issue that people are passionate about on opposites sides, you are going to have a heated debate.  We are proud of how our students represented themselves when confronted with the counter protest group.”

The opposing Confederate group was escorted peacefully off campus and no arrests were made.

Potts said UPD is very grateful for the assistance of the Oxford Police Department and the FBI.

Scott was one of three speakers who voiced their opinion in support of the ASB voting to take the state flag off campus.

She said the flag is a symbol that Ole Miss has institutionalized white supremacy in a way that makes it look okay for exclusion and terrorism to fly freely over a place where students call home, work and school.

“The flag doesn’t do what it’s supposed to do, which is unite people and rally people together. Instead, it creates disunity and division among us. There’s really no room for symbols like that,” Scott said.

She said the she thinks the university is becoming more progressive and having the flag is holding the students back.

Scott said if she had to replace the Mississippi flag with a more appropriate symbol that stands for all Mississippians, she would choose the Mississippi Magnolia flag that originally flew in 1861. She said the history aspect of the flag is very one sided because it only represents the Caucasian population of the South.

“It is representative of everybody,” she said. “That’s a beautiful symbol that the land is for everybody, the land is everyone’s and we have all put in work to make this state to what it is.”

Assistant Director of Public Relations Mitchell Diggs said in an official statement the university commends students for using the democratic process to engage in debate over civic issues.

“As a state institution we fly the flags representing our state and nation; however, as a university committed to fostering a welcoming and inclusive campus for all students, we continue to join other leaders in Mississippi to encourage our government to change the state flag,” Diggs said.