STUMBLING IN MEMPHIS: Ole Miss falters down the stretch in loss to Tigers 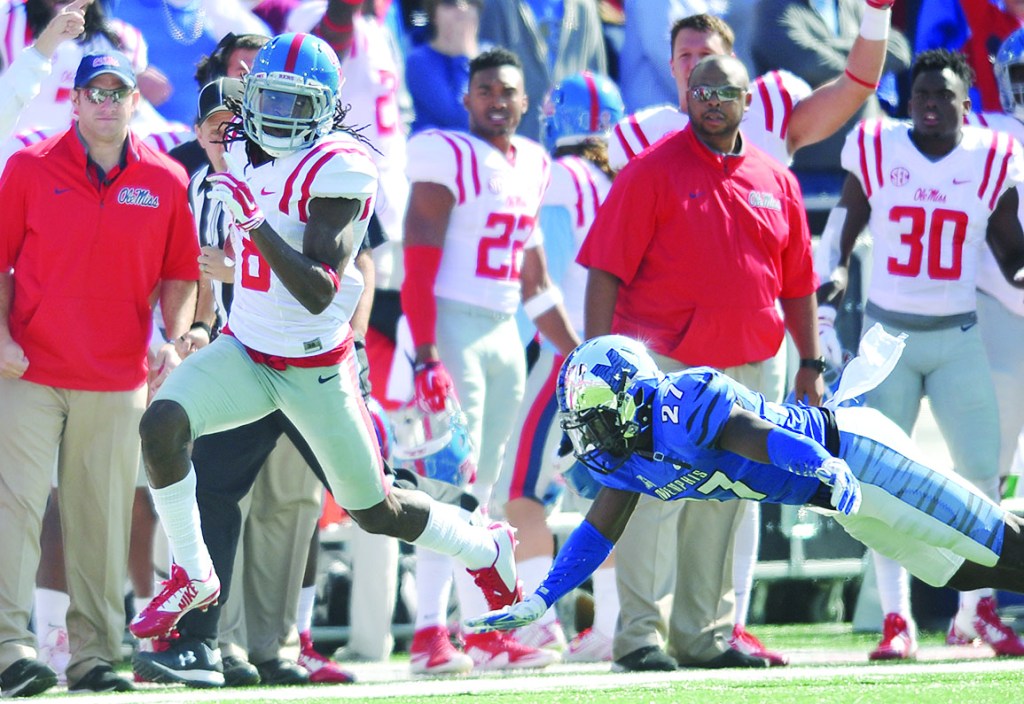 MEMPHIS — Things went from good to worse for Ole Miss on Saturday.

A two-score lead gave the 13th-ranked Rebels some momentum early against Memphis, but Ole Miss’ defense was eventually overwhelmed by Paxton Lynch and the Tigers’ high-octane offense in a 37-24 loss in front of 60,241 at the Liberty Bowl that’s got that win at Alabama feeling like a distant memory.

Ole Miss  (5-2, 2-1 Southeastern Conference) has lost two of four since that victory in Tuscaloosa, Alabama, on Sept. 19 by a combined score of 75-34, and it’s got the Rebels searching for answers.

“There’s something missing for sure,” Ole Miss coach Hugh Freeze said. “That’s my responsibility. … We’re obviously not locked in totally.”

Some trickeration in the passing game helped the Rebels grab a 14-0 lead less than six minutes in, but Memphis (6-0), with the nation’s 12th-best passing attack coming in, quickly found a rhythm and rarely got out of it behind junior quarterback Paxton Lynch, who put together his fourth straight 300-yard game with 384 yards and three touchdowns.

The Tigers, who have won 13 straight games dating back to last season, scored 24 unanswered points to end the first half and led by as many as 17 once Lynch found Mose Frazier for a 31-yard score to cap Memphis’ opening drive of the third quarter as they snapped a six-game losing streak in the series dating back to 2005.

Lynch rarely got much resistance from an Ole Miss defense that entered the game ranked 10th in the SEC against the pass. Lynch completed 39 of his 53 attempts, and with receivers either running free in the secondary or breaking tackles to get loose, the Tigers continued Ole Miss’ misery on third down, converting 60 percent of the time (12 of 20) on the do-or-die down.

“They wanted to win better than us,” safety Trae Elston said. “We’ve just got to check ourselves because a lot of people on our team, we don’t have our heart into it. That’s what we need to do.”

Ole Miss quarterback Chad Kelly nearly matched Lynch throw-for-throw almost out of necessity, going 33 of 47 for 372 yards against the nation’s 120th-ranked pass defense with two touchdowns and an interception. Ole Miss ran 24 times for 40 yards and is averaging 2.6 yards a carry against teams not named Tennessee-Martin, Fresno State and New Mexico State.

“We just haven’t,” Freeze said on the running game. “That’s got to change.”

Kelly’s second scoring toss went 6 yards to Laquon Treadwell midway through the third quarter, and Gary Wunderlich followed with a field goal to get Ole Miss within seven at 31-24, though the Rebels didn’t get any closer. Treadwell finished with a career-high 14 catches for 144 yards and opened the scoring on the game’s second play with a 68-yard touchdown pass to Quincy Adeboyejo on a double pass.

Kelly found Damore’ea Stringfellow for a 23-yard touchdown on Ole Miss’ second possession, but Ole Miss then grinded to a halt in part by its own doing, committing eight penalties in the first two quarters that assisted in negating more long gainers and keeping the Rebels behind the chains.

Sam Craft’s 4-yard touchdown run gave Memphis its first lead at 17-14, and Lynch’s second touchdown pass, a 6-yarder to Anthony Miller six plays after Kelly was stuffed on a fourth-down sneak deep in his own territory, gave the Tigers a 24-14 halftime lead.