THREE AND (NOT) OUT: Rebels’ third-down woes continue on defense 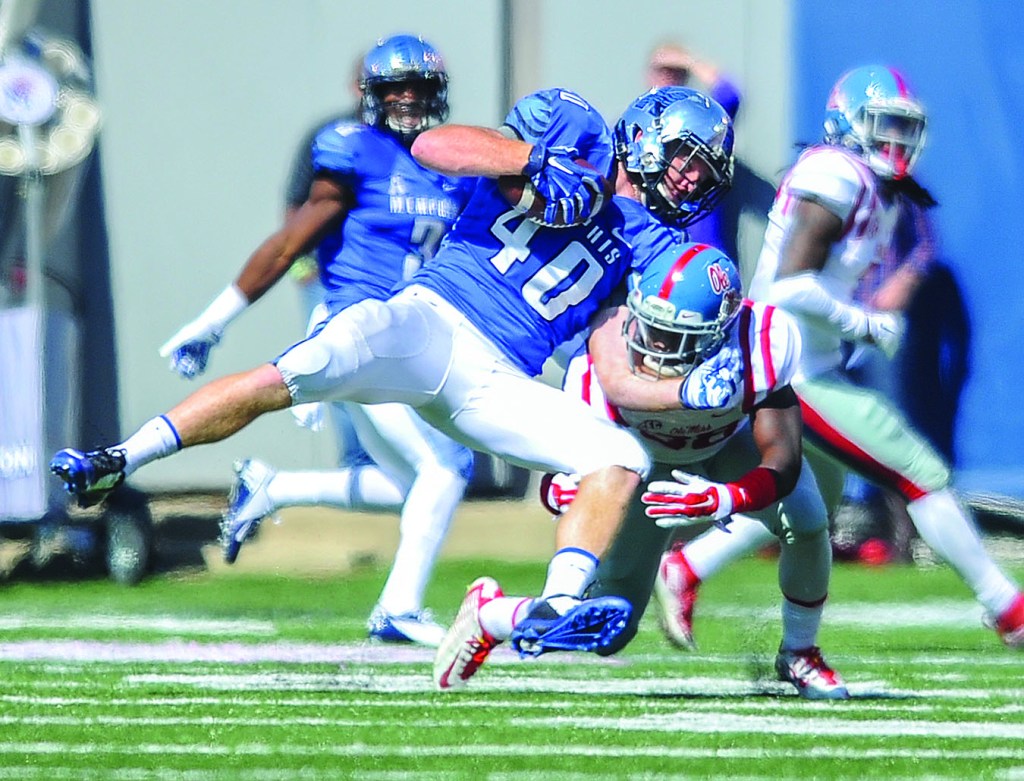 Trouble getting of the field on third down has been an issue for Ole Miss for nearly a month.

The issue was brought to light against Alabama on Sept. 19 when the defense had to be on the field for more than 100 plays. Since then, it has not gotten any better, and Saturday proved to be another costly example.

In the Rebels’ 37-24 loss to Memphis, the Tigers converted 12 of 20 third-down attempts to keep drives alive.

Most of those were not third-and-short situations but third-and-long or what even seemed like third and impossible, yet Memphis made them possible and made Ole Miss pay in the process.

“It was very disappointing in the way we played,” Ole Miss coach Hugh Freeze said. “We were about as bad as you can get on third down getting off the field.”

There were third-and-17s converted and third-and-8s converted at will by the Memphis offense, which was led by quarterback Paxton Lynch. The inability to put Memphis back on the sideline caused the time of possession to be extremely lopsided as the Tigers had the ball for nearly 40 minutes while Ole Miss had it for only 22 minutes

“I just think it was a lot people trying to make the play on their own,” safety Trae Elston said. “We weren’t doing our assignments. I guess we were trying to be individuals and make a solo tackle trying to get the stat for themselves. We weren’t tackling, plain and simple.”

Tackling has become nearly a bigger issue than the third-down situation, but it has not helped matters in that regard either.

During the summer and fall camp, Ole Miss made it a point of emphasis to not practice full tackling due to players, including receiver Laquon Treadwell, recovering from injuries and to try to keep other injuries from happening.

“Anybody who watched the game can see how bad they beat us on third down,” defensive coordinator Dave Wommack said. “In the first half, we missed so many tackles, it was ridiculous. … We’re going to have to have a different plan in the offseason and fall camp doing that and spend more time doing it.”

Fall camp was nearly three months ago, and Ole Miss has played 28 quarters of live football against Southeastern Conference-caliber opponents.

“Fall camp, we didn’t tackle to protect players, and I think that put a burden on us,” Elston said. “That’s no excuse either way. We’ve played seven games. We should know how to tackle.”

In the past five games, the Rebels, who entered Saturday’s game allowing opponents to convert nearly 40 percent of the time on third down, have allowed opponents to convert exactly 50 percent (48-of-96) of their third-down attempts. With Texas A&M looming and games against LSU and three more SEC teams after that, Ole Miss has its work cut out if it wants to fix this issue.

“It’s been a focus for a month,” Wommack said. “I’m sitting here as a defensive coordinator, and I wish I could tell you. … We’ve got to do better. We got a tough game coming up.”