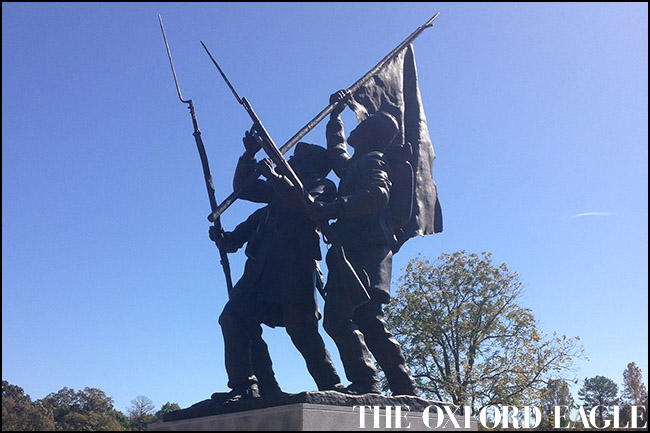 A local business owner’s and his father’s sculpture has been unveiled at the Shiloh National Military Park.

Kim Sessums of Brookhaven and his son, Jake Sessums of Oxford, began work on the Mississippi monument for Shiloh last year. The monument commemorates the soldiers who died during the battle.

“Having been born in Mississippi and having lived here for all but a few years of my life gave me a bit more drive and personal energy to make this work special,” Kim Sessums said. “It is an honor and in some ways my duty to put all my best efforts into these pieces.”

The Battle of Shiloh took place on April 6, 1862, and lasted for two days at Pittsburg Landing, Tennessee. The battle resulted in more than 23,000 men being killed or wounded. The two days claimed more than 1,700 Mississippians.

Rather than side with a cause, the statue is there to give a pictorial view of the men who died fighting side by side who were from Mississippi.

Kim Sessums’ focus was how to honorably portray and execute a figurative sculpture to honor the memory of Mississippians who sacrificed those two days in April 1862.

“I struggled personally and emotionally many days through the process. At one point I considered bowing out of the process which had become a national competition,” he said. “But, when I came across the real words and emotions of those two young men who wrote home on the morning of the battle, I was struck by their tangible sense of their own mortality and by their alluding to eternal things over the temporal; the spiritual over the physical. That is what led me back into the competition and to make efforts to create the best sculpture I could.”

Kim Sessums had quotes from Mississippians who fought that day inscribed on the monument.

Kim Sessums began the project with a mountain of research. He read books about the battle and focused on what happened the first day on Rhea Field.

“I read personal correspondences from young men to their worried families,” he said. “I studied many wonderful sculptures of the Civil War created in the early years of the 20th century by some of our country’s greatest sculptors. And I was moved by the personal nature of much of the research on this project, which reminded me that the common soldiers on both sides were young men doing their duty as they saw it.

“Much of the political and socioeconomic factors that led to the American Civil War were beyond the reach of the people in the lines. But they fought for family and community.”

Kim Sessums worked with his son in the early stages of the project. His son was not reachable over the weekend.

“Jake is very creative and is a hard worker,” he said. “He has a lot of energy and those qualities are important in creating large sculptures. The mere size of the monumental clay figures requires a steadfastness in addition to the vision to see it through.”

He said having his son present made the work even more special as a father, as an artist, and as he considered the relationships these big figures of bronze might have had with their families.

Kim Sessums said the monument is a representation of real people, real lives that were lost and real history to be remembered and learned from.

“Bronze is permanent in a sense,” he said. “Those … rendered figures will be there for a long time.”