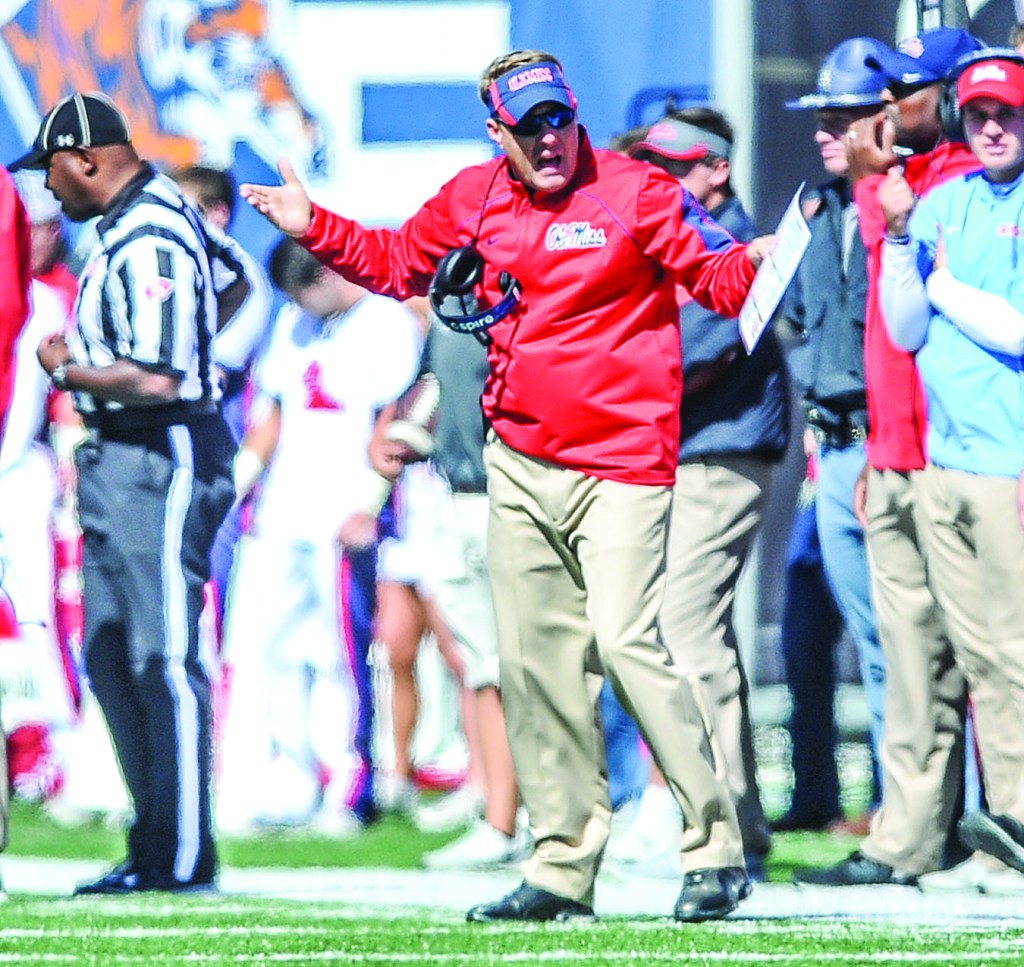 A season full of hope and anticipation for Ole Miss all of a sudden looks like a year on the brink.

The Rebels fell flat in the final three quarters of Saturday’s 37-24 loss at Memphis, a setback littered with untimely mishaps, fundamental flaws and puzzling decisions made by head coach Hugh Freeze.

It was Memphis’ first win over a ranked team since 1996, and it came just a month after Ole Miss (5-2, 2-1 Southeastern Conference) looked like a serious national player after its 43-37 win at then-No. 2 Alabama on Sept. 19. Since then, the Rebels’ only victories have come against two-win Vanderbilt and winless New Mexico State with losses to Florida and the Tigers coming by a combined score of 75-34.

What’s happened since that euphoric night in Tuscaloosa?

“Injuries have hurt obviously, but that’s not the reason we didn’t play well today,” Freeze said when asked that exact question minutes after Saturday’s loss. “I’ve got to coach them better, and we’ve got to have leadership in the locker room.”

Defense is the easy place to start.

Alabama went pass-heavy in the second half of that game to try to get back in it and drew up the blueprint that everybody else has used since to attack the Rebels’ inexperience at linebacker and in the secondary even with Tony Conner and C.J. Johnson on the field.

The Crimson Tide threw for 288 yards and converted on 11 of 20 third downs to keep Ole Miss’ defense on the field for 101 plays. Getting off the field has turned into a running problem for the Rebels, who have allowed the last five opponents to convert exactly 50 percent (48 of 96) of the time and were the worst they’ve been all season Saturday as the Tigers threw for 384 yards and converted 12 of their 20 third downs as Ole Miss had to defend 94 plays.

“We’ve got to do something to convert and get off the field,” Freeze said.

The defensive stats didn’t have to be that bad Saturday, but the Rebels whiffed on tackles that would’ve stopped the Tigers short of the distance they needed on numerous occasions, causing Freeze to say afterward “it was about as bad as I’ve ever seen.” Ole Miss held off on full-scale tackling in preseason camp to try to get to the season as healthy as possible, though some players don’t see that as a valid excuse at this point of the season.

Offensively, quarterback Chad Kelly and his group of receivers are doing what they can without the help of a running game, which once again floundered with just 40 yards on 24 carries Saturday and is averaging a measly 2.6 yards an attempt against teams not named Tennessee-Martin, Fresno State or New Mexico State.

The lack of push up front with no go-to running back on the roster in Freeze’s fourth year has caused the Rebels to try to compensate by putting star defensive tackle Robert Nkemdiche on offense in short-yardage situations, which backfired Saturday when he was tackled on his head on second-quarter run and left with a concussion. Ole Miss also came up short on a pair of fourth-and-1s, the last coming on a sneak late in the second quarter at its own 34-yard line after Memphis had already scored 17 unanswered points to erase the Rebels’ 14-0 start.

“We really need to change this momentum and get some points is what you’re thinking,” Freeze said, “but obviously it was not a good decision to do it.

“It was very disappointing the way we played, and that starts with me. I have to take responsibility for us, for all facets of it.”

Now comes a stretch of five straight Southeastern Conference games to end the regular season starting Saturday with Texas A&M. The Rebels still control their own destiny in the Western Division race, but to keep it that way, Ole Miss has to find answers to a barrage of problems — and fast.

“Right now is really where we’ve all got to come together and realize if we want a different season, we’ve got to change it around right now,” Kelly said.

STUMBLING IN MEMPHIS: Ole Miss falters down the stretch…